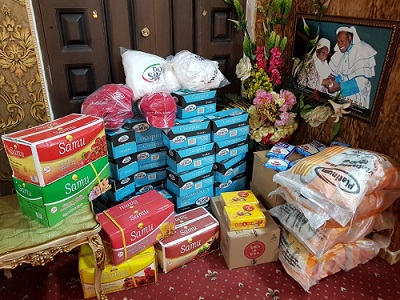 The items included 500 packs of Don Simon fruit juice, 3000 sachets of Samu spices, quantities of rice, sugar and  biscuits
They also donated 100 T-shirts and caps to the Chief Imam for distribution to the youth in his household.

The Group Director of Imax Media Group, Fadi Fattal who presented the items, described their gesture as part of the corporate social responsibility of the two bodies responsible for the ongoing DE-LUXY Boxing League.

For his part, GBA President, Abraham Kotei Neequaye, commended the Chief Imam for his leadership qualities that had contributed to maintaining peaceful co-existence between the Muslim community and other religious bodies in Ghana over the years.

Receiving the items, Sheikh Sharubutu expressed his profound gratitude to the management of Imax Media Group and the GBA, saying it came at the right time to energise the beneficiaries during the Ramadan.