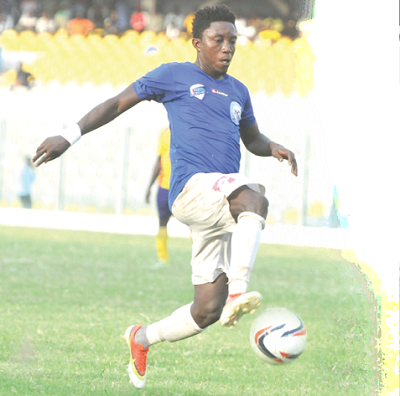 There was unrestrained joy at the Nana Agyeman Badu Park at Dormaa-Ahenkro after Aduana Stars earned a hard-fought 2-1 home victory over Elmina Sharks to emerge winners of the 2016/2017 Premier League after going undefeated in 15 home matches this season with one game to spare.

The Dormaa-Ahenkro club won 12 and drew three times at home to claim the league title since their maiden triumph in 2010.

After missing out on last season's title to Wa All Stars, Aduana came back strongly this season as they turned their home grounds into a fortress and still managed four wins, six draws and four losses in their away games going into next Sunday's final game against 11th-placed Ashantigold.

On their way to claiming the title, Aduana scored 43 times -- the highest scoring side so far -- and conceded 21 goals

Yesterday’s victory did not come without a fight. The home side put up a spirited performance to defeat Sharks through a controversial winning goal late into the game which held up play for nearly eight minutes as the visiting side protested against a 75th minute penalty which prepared the ground for Aduana to win the game through Sam Adams.

Against the run of play, Sharks scored the opening goal in the 43rd minute through Benjamin Tweneboah, but Aduana came back strongly after recess and cancelled the lead eight minutes into the second half when defender Abdul Rashid headed home a free kick deep into the goal area of Sharks.

Until that goal, the attackers of Aduana Stars, led by Derrick Sasraku and Noah Martey, had wasted many chances to the displeasure of their expectant fans.

The home side pressed on for the winning goal until the 75th minute when they were awarded a spot kick for a foul on their striker Zakaria Mumuni. The decision did not go down well with Sharks as Coach Yaw Acheampong led his players to challenge the decision which held up play.

And when order was restored Aduana’s Adams scored from the spot after his shot hit the crossbar before bouncing on the ground for the goal. But that also attracted protests from the players of Sharks who rush on Assistant Referee Assistant David Laryea claiming the ball did not cross the line, an incident which caused another hold up.

And when referee Uriah Glah whistled for the end of the match after adding on 10 more minutes to compensate for the delays, it was all joy amid drumming, dancing, singing, waving of flags and showering of praises on the Dormaahene, Osagyefo Oseadeyo Agyeman Badu II, the bankroller of Aduana Stars.