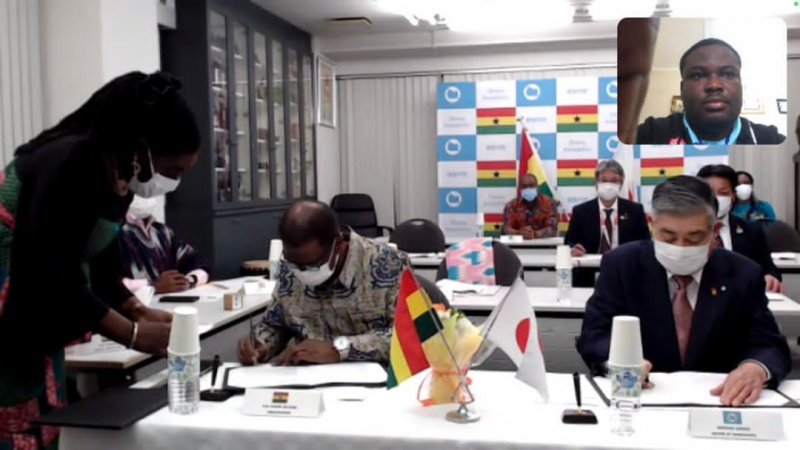 The signing of the agreement in Accra
30.5k Shares

The National Paralympic Committee (NPC) Ghana has signed a historic agreement with Inawashiro, a town in Tokyo, Japan to host Ghanaian Para athletes for pre-camping ahead of the Paralympic Games in August, Tokyo.

The agreement, signed on Friday, March 19 would see qualified Ghanaian athletes pre-camp in Inawashiro to train and fine-tune preparations for the quadrennial showpiece.

The deal between the NPC-Ghana and the Inawashiro Township would see Inawashiro host the Paralympic Team from Ghana in a pre-games training camp from July to August 2021 before the contingent moves to the official Games village for the Tokyo 2020 Paralympic Games.
Mr. Samson Deen, the President of the NPC Ghana expressed gratitude to the Mayor of Inawashiro, Hiroshi Zengo, and staff for the partnership agreement and for opening their doors to the Paralympic family from Ghana to embark on a pre-games camping experience ahead of the postponed Tokyo 2020 Paralympic Games from August to September this year.
He said the NPC Ghana would endeavor to utilize the opportunity by using the facilities in Inawashiro to train hard and raise the flag of Ghana very high and promote the Inawashiro Township and Japan as a country to the whole world.
Mr. Deen thanked the Ambassador of Ghana to Japan, Mr. Frank Okyere for his positive energy and the support given to the NPC, the Minister of Youth and Sports, and the Director-General of the National Sports Authority for the constant support to develop and promote Para sports in Ghana.
The Mayor of Inawashiro, Mr. Zengo said his team would prepare the training facilities for the athletes to train and was excited the partnership deal was successful.
Mr. Peter Adjei, the Secretary General of the NPC Ghana said, not less than seven Para athletes would qualify for the Paralympic Games, adding that, currently, athletes were camping at the Cape Coast Sports Stadium training and preparing for their respective qualifiers to pick a ticket for the Games.
Participants at the signing ceremony were officers of the Paralympic Committee of Ghana, representatives of the Ghana Embassy in Japan headed by Frank Okyere, Ambassador of Ghana to Japan and the Office of the Mayor of Inawashiro Town in Japan.
Daily Graphic Newspaper, Graphic Sports Newspaper