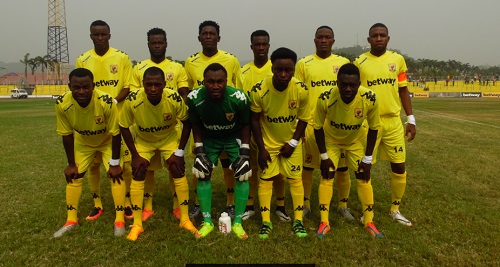 Sleeping giants, AshantiGold were the surprise top scoring club after the curtain on the first round of the Ghana Premier League was drawn last week.

Despite languishing on the 10th position of the log, the ‘Soccer Miners’ completed the first half of the season with 27 goals to distinguish themselves as possessing the most lethal attacking side in the Ghana Premier League.

Ashgold’s total goals scored, therefore, averages about 1.6 goals per a game which is the highest per game average with bottom-rooted Inter Allies accounting for just nine goals in the entire season which averages 0.53 goals per a game and the lowest.

Coincidentally, even though Ashgold’s possess the best attacking force in the league, their defence could also be described as one of the weakest during the first part of the season as it leaked more goals.

Per the statistics, apart from bottom-placed side, King Faisal, who have conceded 27 goals, the Obuasi-based club is the next with the most porous defence in the league having conceded as many goals as King Faisal.

At the end of the first round, however, Kumasi Asante Kotoko’s 13 goals scored so far are considered among the least of goals scored by any of the top four teams and the goals are the third lowest after Inter Allies (nine goals) and Liberty Professionals (11 goals).

Top scorers
The first half of the season also saw the clubs scoring a total of 338 out of which Karela United’s Diawisie Taylor has contributed 12 goals followed by Joseph Esso of Dreams FC  with 10 goals, while Kwame Peprah of King Faisal has nine goals.

The 5-4 scoreline recorded between WAFA and Medeama SC in a seventh week fixture remains the highest scoring game in the season so far, while 15 other matches ended goalless draws.

Accra Hearts of Oak’s 6-1 win over Behcem United during a seventh week clash was the highest goals margin recorded by a club, while other games such as Ashgold's 5-1 win over King Faisal, Faisal's late 4-2 victory against Berekum Chelsea, and WAFA's 5-0 thrashing of Liberty produced similar feast of goals.

Most clean sheets
A total of 96 clean sheets were kept throughout the games with Kumasi Asante Kotoko and Accra Great Olympics leading the pack with nine clean sheets apiece.

Five teams -- Berekum Chelsea, Elmina Sharks, Eleven Wonders, King Faisal and Inter Allies -- were bad travellers having gone without a win in all their away matches, while Olympics and Asante Kotoko have won the highest number of away matches -- four games apiece.

Strongest defence
Asante Kotoko could be considered as the team with the best defensive record away having considered just four goals, while Ashgold has conceded 17 goals any time they travel away from home which is the poorest away record of any club.

League leaders, Karela United, is the only side not to have drawn any game at home this season, while five other teams—Medeama SC, Aduana Stars, Bechem United, WAFA and Berekum Chelsea— never lost any game at home.