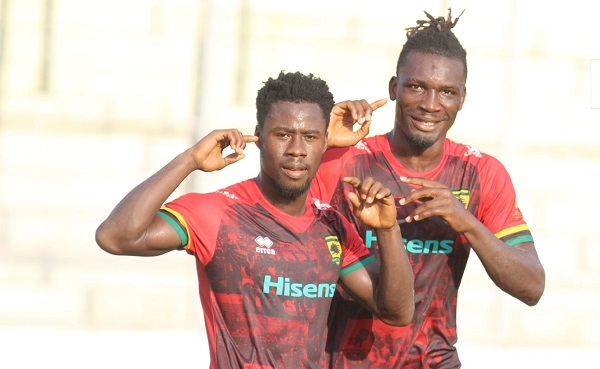 Asante Kotoko’s new gaffer, Mariano Baretto, guided his side to a second straight victory after an emphatic 2-0 win over Berekum Chelsea at the Obuasi Len Clay Stadium on Sunday.

The Portuguese trainer, who made his winning debut during their 4-0 win against Bechem United in their outstanding game last Wednesday, continued their winning ways to send Kotoko to the top of the Premier League log one point ahead of Great Olympics who lost Legon Cities in Accra.

Francis Andy Kumi opened the scoring for the Porcupine Warriors in the 26th minute before Godfred Asiamah crowned it with another fine goal just in the nick of full time.

Rivals Hearts of Oak, on the other hand, dropped to the fifth position on the league log after they were shocked by Ashgold during their 0-1 loss at the Len Clay Stadium last Saturday.

Hearts had the opportunity to take the lead in the 18th minutes after they were gifted a penalty after a bad tackle on winger, Patrick Razak, but goalkeeper Kofi Mensah read Victor Aidoo’s kick well to make a brilliant save.

Just when it appeared the game was heading for a draw, the ‘Soccer Miners were awarded a penalty after Hearts of Oak skipper, Fatawu Mohammed, was adjudged to have handled the ball in the box for a penalty which was converted by Amos Addai.

Hearts now have 30 points, same as fourth-placed Medeama SC, but are separated by superior goal aggregate.

Yesterday also saw Aduana Stars bounce back from their 0-2 defeat to Accra Hearts of Oak last weekend, to beat struggling King Faisal 3-1 at the Nana Agyemang Badu Park, while Inter Allies embarked on a giant-killing feat with a 2-0 win over third-placed Karela United at Dawu.

Legon Cities displayed a spirited performance to burst Great Olympics’ bubble following a 2-0 win at the Accra Stadium,a loss which saw the Wonder Club slip to the second position on the log behind Kotoko.

Medeama SC beat Dreams FC 2-0 at the Akoon Park (Tarkwa), while the Red Bull Arena at Sogakope continued to be a no-go area for visiting teams as hosts WAFA defeated Bechem United 1-0.