Manager: Asante Kotoko must break bank to get Shafiu Mumuni 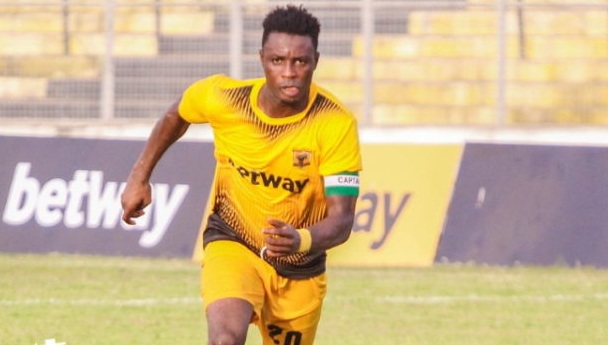 Samuel Ebo Kwaitoo, manager of highly-rated Ghanaian striker, Shafiu Mumuni, says only a whopping offer from Asante Kotoko can convince the player to sign for them.

The Porcupine Warriors have reportedly renewed interest in the Black Stars B skipper and goal poacher, as the registration window draws to an end on October 31.

Kotoko saw their initial bid for Mumuni a couple of months ago turned down following the player’s intended trip to Europe. However, the management of Kotoko are said to be contemplating reopening negotiations with the current best striker on the local scene following the club’s inability to sigh Ugandan striker, Stephen Mukwala.

Speaking in an interview today, Ebo Kwaitoo said if Kotoko indeed needed Shafiu, then they should be ready to meet his demands to be able to acquire his signature.

“When I met Asante Kotoko CEO earlier, I told him that the player preferred a move to Europe as the first option, with North Africa and Asia as the second option. The Ghana league ranked last on the list,” he recalled.

Mr Kwaitoo went on to explain that the player failed to join Greek side Apollon Smirnis FC in the Greek Super League a fortnight ago because of the Coronavirus travel restrictions, while revealing further that a move to Spain earlier on also fell through for the same reasons.

He disclosed that though he had not been contacted again officially by Kotoko on the issue, only a better offer than what foreign clubs were offering could turn the head of Shafiu to play for Asante Kotoko.

He noted that Tanzanian side, Young Africans (Yanga), for instance, were ready to offer the player a monthly salary of $5,000, in addition to a signing-on fee of $50,000, which was rejected.

“Another club from South Africa, Baroka FC, offered him $4,500 salary and a signing-on fee of over $10,000 but that was also not considered,” he added.

“So if Kotoko really want the player they have to come and come well since we have a lot of attractive foreign offers on the table,” he stated.
Kotoko need a potent striker badly to sharpen their attack ahead of the new season.

Maxwell Konadu’s side will compete for honours in the domestic competitions, while also featuring in the CAF Champions League.