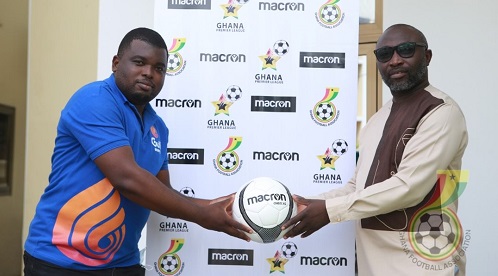 Each of the 18 clubs in the elite division is expected to receive 30 ball to aid in their training ahead of the start of the new league season scheduled to start on November 13.

It would be recalled that in June the GFA signed a GH1.6m sponsorship deal with kit and football manufacturer, Macron, to become the official match ball sponsor of the Premier League, the Division One League (DOL) and the FA Cup.

Under the three year deal the match ball sponsor is expected to provide 5000 pieces of footballs and 1,500 pieces of bibs each season to the association.

Beside the footballs, the clubs have also been presented with an unspecified number of branded bibs and football bags from the official sponsors.

Meanwhile the GFA has hinted that the 48 DOL clubs would be duly notify as to when to pick up their footballs for training as they prepare to start their league three weeks after the start of the Premier League.