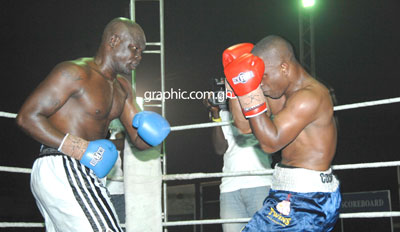 Among the larger Ghanaian society, Braimah ‘Bukom Banku’ Kamoko is the main guy of Ghana boxing today, but when Albert Mensah and Ben Odametey take to the ring in Accra tonight, they will rival any boxing rivalry in the sport locally.

The pair will be fighting for the International Boxing Federation (IBF) Continental Africa lightweight title tonight at the Accra Stadium on the same bill which will feature Bukom Banku’s fight with George Tevdorashvili of Georgia in an international cruiserweight contest.

The drama that has characterised the build-up to their title fight has been an interesting spectacle around the environs of Bukom, Ghana boxing’s main base.

The Mensah-Odametey fight has somewhat assumed an even more important space comparable to what Bukom Banku brings to the ring.

In their separate gyms, the experienced pair of Mensah and Odametey, who have a combined 58 fights between them, have maintained high focus for the fight ahead and resisted the temptation to be caught in the peripheral schemes among their respective fans.

Such is the anxiety within their camps that the fight has been raised to a pedestal that competes with any of the other six fights on the bill — three of them title fights.

On a bill labeled ‘Danger Zone’ by GoldenMike Promotions, it could well turn out to be a danger zone for George Tevdorashvili who has accepted the challenge to fight the hard punching Kamoko.

The 32-year-old Kamoko’s soaring profile has been aided by his 25-0 fight record, and the prospects of a full world title fight sometime later has been a chief motivator in his career journey.

His 27-year-old Georgian opponent, who has a ring record of 13-7-3, may have promised to “bring Kamoko down to earth” but the task looks as daunting as anything else.

In a special feature, Helen Joseph of Nigeria will fight Mariana Gulyas of Hungary in an IBF Inter-Continental female featherweight title fight.