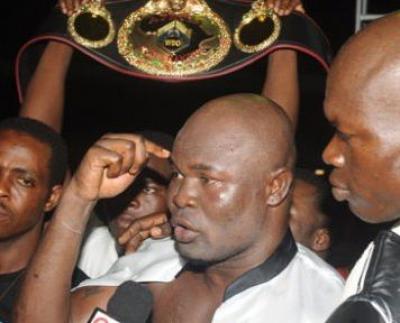 Braimah Kamoko, Bukom’s enigmatic boxing hero, met a tough customer in George Tevdorashvili but adapted to the conditions to achieve a seventh round technical knockout in their international cruiserweight contest at the Accra Stadium last Friday.

Despite the fight failing to last the full 10-round distance, the 27-year-old Georgian may have quit with his health intact as he frustrated the local hero in six rounds of punch and clinch antics.

Indeed, Tevdorashvili may well be on course for a major upset if stamina had not proven a major concern, his fight strategy having worked to near perfection all night until Kamoko, aka Bukom Banku, began to work on his body ruthlessly.

All previous fights on the night had ended within the distance, and Banku, with 19 KOs out of his 25-0 fight record, was highly tipped to finish matters quickly against the Georgian. But the first bell alerted fans to the tough journey on hand for the partisan crowd and their idol as Tevdorashvili boxed with caution.

The bill had been labeled Danger Zone by GoldenMike Promotions, and that seemed to guide the Georgian about the lurking danger in the punches of his opponent. So when he boxed and clinched in the opening rounds, it frustrated Banku and angered the crowd, but kept him in the fight – and perhaps in the lead on the scorecards.

The trend continued into the fourth round, with Tevdorashvili surviving even the few times the two mixed it up in the corners. Then Banku began to work on Tevdorashvili’s ribs with heavy body shots that brought the crowd back to life.

The one-punch show, always into the rib of Tevdorashvili, began to slow the Georgian who became even more reluctant to free his opponent anytime he clinched.

There were doubts about Tevdorashvili returning for the sixth round when he refused to sit during the break, with his cornerman shaking his head at something the boxer had said. But the sound of the bell revived hostilities – in the manner the previous round had ended – but Tevdorashvili would take no more when he quit at the start of the seventh round.

Albert Mensah also earned a seventh round TKO victory over veteran Ben Odametey to win the IBF Continental Africa super-lightweight title, while Samuel Amoako stopped Richard Amefu in the fifth round in their lightweight contest.

Bastie Samie, one-time captain of the Black Bombers during his days in the camp of the national amateur boxing team, scored a second round TKO victory over nigeria’s Ademola Faniyi in a super-middleweight contest.

Former Commonwealth lightweight champion, Joshua Okine, floored Alaba Okusote twice in the second round on his way to a third round TKO victory in their international light-middleweight contest.