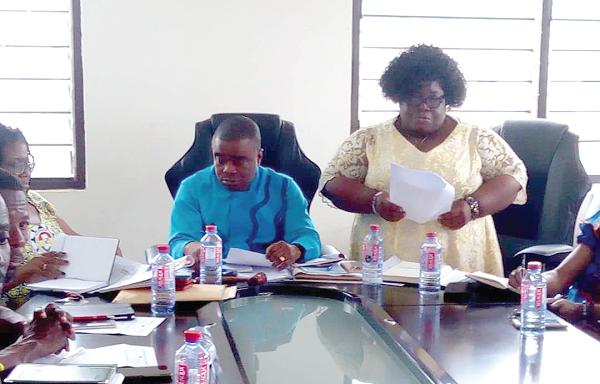 The Ga North Municipal Assembly has held its first ordinary meeting to deliberate on issues that affect the growth of the assembly.

The issues discussed included the assembly seal, the logo, its vision, mission, core values and the approval of the assembly’s 2018 Budget, challenges and how to address them.

In view of that, she said revenue mobilisation strategies were being put in place to generate revenue from all areas and as well as identify new areas, urging assembly members to put in their maximum effort.

“No stone would be left unturned. We therefore need your full support by encouraging your electorates, corporate institutions and businesses within your electoral areas to promptly pay their levies to the assembly we can also give back to society,” she said.

Ms Ankrah said she was committed to ensuring that her municipality became the cleanest, indicating that adequate steps were being put in place to ensure that the Environmental Health Officers at the assembly collaborated with assembly members to organise clean-up exercises within the various electoral areas on a regular basis.

“In that regard, plans have been initiated to acquire a land for final disposal of refuse which is a major challenge for management of waste in Accra.  Measures will be put in place to encourage our waste contractors work to expectation. I would also encourage assembly members to sensitise their electorate to be concious of our natural environment and keep it clean and healthy,” she added.

Ms Ankrah also urged all assembly members and the entire staff to develop a positive attitude towards work.

She cautioned them to shun all corrupt practices, saying that such practices were inimical to the growth of the assembly.