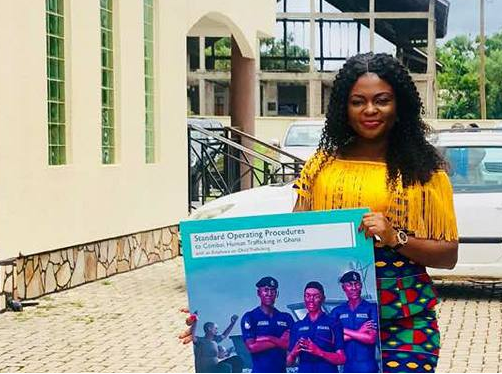 The Volta Regional Secretariat of the National Democratic Congress (NDC) has congratulated the Member of Parliament (MP) for North Dayi, Ms Joycelyn Tetteh, for her nomination as the Anti Human Trafficking Ambassador for Ghana by the International Organisation on Migration (IOM).

Ms Tetteh was named the ambassador at the regional launch of the Standard Operating Procedures (SOPs) to combat human trafficking in Accra last Thursday.

The SOPs will serve as a one-stop reference point for identifying and handling human trafficking cases.

“We celebrate you for the unprecedented honour this has brought to the chiefs and the people of North Dayi, the Volta Region, and the NDC family in particular”, in a statement signed by the NDC Volta Regional Secretary, Mr James Gunu, said.

It said the nomination of Ms Tetteh as the ambassador to combat human trafficking in Ghana was a call to serve humanity which the NDC was proud of.

“The party sees this honour as a duty call, service to humanity and most significantly, the qualities of a competent woman with passion for the job.

“We wish you well in your ambassadorial duties. Once again congratulations”, the statement said.

Barely two months ago, Ms Tetteh received a recognition letter from the Ministry of Gender, Children and Social Protection for her contribution towards the fight against child trafficking.

The recognition letter lauded Ms Tetteh for her support and contribution towards a successful commemoration of this year’s World Day Against Trafficking in Persons held at the Afram Plains North District on August 18, 2018.

In her remarks after the recognition, Ms Tetteh, who is a member of the Women’s Caucus in Parliament, called for a concerted effort to educate children on their rights and privileges and how to respond when others tried to infringe on their rights.

“We can never make progress in our quest to end child trafficking and child labour if we fail to channel resources into the education of the very victims of this inhumane act.

“By educating our children, we reduce their vulnerability and empower them. Many children fall victim to trafficking schemes by being trafficked with gifts and incredible offers. Most often, these children do not even know that they can be exploited in these circumstances and ,therefore, do not know how to protect themselves”, she said.