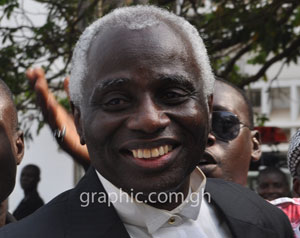 The Supreme Court yesterday asked the lawyer for the National Democratic Congress (NDC), Mr Tsatsu Tsikata, and the star witness for the petitioners, Dr Mahamadu Bawumia, not to engage in arguments over whether or not pink sheets had been certified or attested to but leave that for determination by the court.

The President of the court, Mr Justice William Atuguba, was responding to a complaint made by Mr Tsikata that the witness was not responding to his questions but rather talking about the attestation of pink sheets when those pink sheets had been certified by polling agents of the petitioners.

Mr Tsikata wanted the witness to respond that the polling agents of the petitioners, who were present during the elections, had, indeed, certified the results by signing the pink sheets.

However, Dr Bawumia, in his responses, preferred to use the word ‘attest’, not ‘certified’, which was used by counsel.

Mr Tsikata seemed to have had a field day during the day’s proceedings because all the objections which were raised by Mr Phillip Addison that it was not proper to let the witness identify certain pink sheets given by counsel for the NDC were overruled by the court.


The line of cross-examination would not have departed from the previous days’ but for the heated arguments generated by those objections.

At certain stages in the proceedings, Mr Tsikata seemed to neglect pleas to him from the bench to change the line of questioning, since those had long been dealt with by him.

Counsel was let off the hook when Mr Addison complained that Mr Tsikata had referred to the witness as ‘untruthful’ and, therefore, wanted him to withdraw that comment.

Mr Tsikata began by drawing the attention of the witness to where he had left off at the last sitting and suggested that the statement made by witness in his affidavit that there had been over-voting on some of the pink sheets was not truthful.

Dr Bawumia responded that it was because the petitioners were no longer relying on those pink sheets and that what was contained in the affidavit was truthful.

The witness disagreed with counsel that there was the possibility of an error on some of the pink sheets, since the data on them were entered wrongly.

When Mr Tsikata insisted that it was possible for the polling officers to have made errors because the witness had made numerous errors on documents put before the court, Dr Bawumia replied that many possible errors could be made but they should not affect the election results.

Dr Bawumia admitted, when he was confronted, that in his petition his calculation of some figures had been incorrect but added that the error should not affect somebody’s presidency.

Mr Tsikata showed a pink sheet on which there was a blank space to Dr Bawumia and put it to him that that could not be interpreted as zero but the witness stated the blank space was zero.

The argument over polling agents either certifying or attesting to data on pink sheets started when Mr Tsikata asked whether polling agents of the petitioners who were sent to the polling stations did certify results declared by the Electoral Commission (EC).

“Polling agents cannot certify results. They attested to information on the pink sheets’’ was one of the answers provided by Dr Bawumia.

At that stage, Mr Tsikata sought leave from the court to allow the witness to read portions of the Public Election Regulations relating to the role of polling agents, after which he maintained that the agents only attested to information on the pink sheets.

Ms Justice Akoto-Bamfo intervened and reminded Mr Tsikata to leave that line of questioning for his address because those questions had been asked long ago, more so having made the witness to read  the guide to election regulations.

She said the issue of attestation or certification had to be determined by the court.

But Mr Tsikata insisted that the questions related to tally sheets, which had not been dealt with.

The President of the court said tally sheets were part of the functions and rights of polling agents referred to in documents pertaining to the matter and, therefore, should be left for addresses.

Mr Justice Atuguba, who interspersed his statement with lots of laughter and jokes, said those were matters which were well known.

But in the end Mr Tsikata persisted and had his way to pursue that line of cross-examination.

Regarding discrepancies between results written in figures and words on some pink sheets which the witness identified, Dr Bawumia said when it came to tallying the results, the figures were considered over the words.

Counsel suggested to the witness that he had exhibited pink sheets on which results were declared in favour of President Mahama and that if those irregularities alleged by him were found in the stronghold of the petitioners, those results should be annulled.

Dr Bawumia replied in the affirmative.

One pink sheet which generated a heated argument was that of the MA Primary School Polling Station at Asokwa in the Ashanti Region which counsel gave to the witness to identify.

He argued that allowing the petitioners to bring that pink sheet amounted to a surprise and also making the NDC a co-petitioner in the matter, which was not so.

Mr Tsikata responded that identifying the pink sheet stemmed from the responses given by the witness that most of the irregularities alleged by them inured to the benefit of President Mahama.

According to counsel, there was no way the petition could be heard without examining pink sheets in the 26,002 polling stations in which the petitioners claimed about 55 per cent and 28 per cent of votes should be annulled against President Mahama and Nana Akufo-Addo.

“Annulling 55 per cent of the votes of one candidate and 28 per cent of another candidate will be unjust determination by any court,’’ Mr Tsikata claimed.

The court rose for lunch break before it ruled on the objection.

On resumption, the objection was overruled by the court on the grounds that the question posed was covered by sections in the Evidence Act and Paragraph 27 of the NDC’s amended answer.

After that, Mr Tsikata based his questions on that pink sheet, compelling Mr Addison to raise another objection that the questions were based on the pink sheet identified by the witness.

According to Mr Addison, allowing questions to be asked on the pink sheet meant the NDC was putting up a new case and also that the petitioners were being surprised, especially when the rules said all parties must disclose documents they intended to rely on in the trial.

He said the NDC opposed the allegation of over-voting and said there was no such thing. Therefore, allowing it that time was unwarranted by the Constitution and was in violation of the very rules of the court set up at the hearing of the case.

“If they had put all their cards on the table, we would also have asked for further and better particulars on these matters and not when the witness is being cross-examined,’’ he said.

Mr Tsikata replied that the NDC did not seek to be co-petitioners and, therefore, quoting provisions in the Constitution was irrelevant.

The court took another break in order to rule on the objection, which was again overruled.

According to the court, in so far as the pink sheet portrayed irregularities alleged by the petitioners on pink sheets of the same kind, the objection could not be sustained.

It, however, ruled that questions to be asked should be in line with the pink sheet.