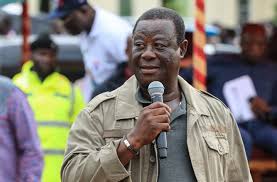 I am pursuing senior civil servants and engineers in my ministry, who have set up road construction companies and have been awarding road contracts to themselves over the years, the Minister of Roads and Highways, Mr Kwasi Amoako Atta has said.

He said he has been using the last five years as the sector Minister dealing with that canker which is well known by many road contractors, both those still working and retired.

He said it was not proper for officers in the ministry responsible for awarding contracts and paying contractors to be setting up road construction companies to compete with the contractors.

That, he said was the reason why some people who are not happy with his fight, which is affecting them are wanting to bring him down by writing anonymous letters and making unfounded allegations.

Mr Amoako-Atta said that will not deter him and will rather embolden him to keep on with the fight.

In a radio interview with Accra based Oman FM monitored by Graphic Online Wednesday morning [Jan 19, 2022], Mr Amoako Atta said his personal investigations into one of such recent letters written by a group describing themselves as "concerned contractors" and given a wide circulation by copying many investigating agencies had not even been delivered to those bodies.

There is a supposed letter from alleged concerned contractors making allegations about my ministry.

He said he was aware of those behind it who gave a wide distribution to the letter but were yet to even serve those copied in the letters with their copies.

Rather, since he has nothing to hide, he said he has instructed his lawyers to send copies of the said letters containing the allegations to the investigating agencies for them to look into it and that his doors were open for a probe.

He said he was prepared to respond to the said allegations even at an open forum.

Engineers have their own companies and award contracts to themselves. How can you belong to a ministry and do this, the minister questioned.

This, he said has been happening for many years. It is common knowledge that people in the ministry have been doing this.

He said those dirty deals were being corrected and reversed and “so I know many people will not like me for this.”

I’m pursuing all those engaged in those deals, he added.