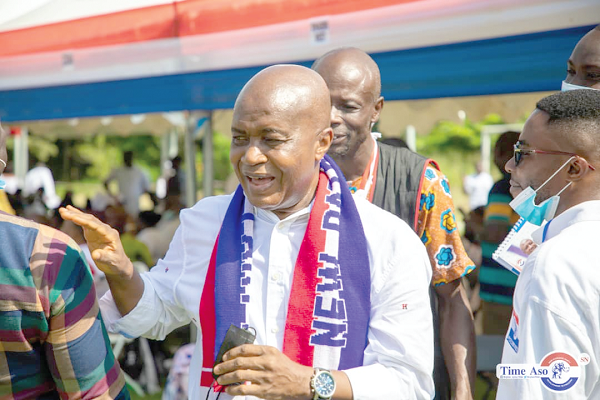 An aspiring national chairman of the New Patriotic Party (NPP), Mr Stephen Ayesu Ntim, has pledged to ensure that the party goes to the 2024 general election with a united front for victory when he’s elected as National Chairman.

Mr Ntim, who is a former National First Vice Chairman of the NPP, said under his chairmanship, the NPP would break the eight-year party rule by a political party in Ghana.

He stated that it would be extremely difficult to break the eight-year cycle with a disunited party.

“We need to break the eight-year cycle but without unity, it will be difficult to achieve that.

I see 2024 elections as critical and the nature of that election is such that all hands must be on deck and my duty will be to ensure that all teething issues are settled amicably from the polling station to the national before we enter the 2024 campaign season,” he stated.

Mr Ntim, who is a former board chairman of the Lands Commission, was speaking with journalists in Kumasi.

“I have sacrificed, suffered, and toiled for the unique opportunity to serve the party as the National Chairman and will sacrifice everything to ensure we break the 8,” he stated.

Mr Ntim said he had the capability to galvanise the grassroots towards achieving the vision of the party and to stamp the NPP’s dominance in Ghana’s political space.

He said considering his role in the party, he had the institutional knowledge and experience to help the party break the dreaded eight years.

“Many patriots across the country believe it is Steven Ntim’s time to lead the party as he has enough wealth of experience and expertise in leading the NPP to victory,” he stated.