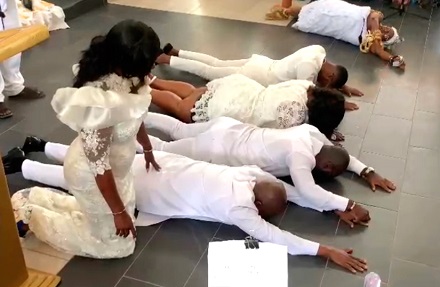 Stephen Ayesu Ntim ( 2nd from left on the floor), the National Chairman of the New Patriotic Party, and some members of his family praying to God at the St Peter’s Methodist Church at Achimota Mile 7 in Accra
30.5k Shares

It was an all-white affair, with emotional and spectacular scenes, at the thanksgiving service for the National Chairman of the New Patriotic Party (NPP), Stephen Ayesu Ntim.

The service, which doubled as the 64th birthday thanksgiving of the new NPP Chairman, who won the chairmanship after three consecutive attempts over a 20-year period, attracted a large number of NPP bigwigs.

The service, held at the St Peter’s Methodist Church at Achimota Mile 7 in Accra yesterday[August 7, 2022], was attended by the Vice-President, Dr Mahamudu Bawumia, his wife Samira Bawumia; the Minister of Trade and Industry, Alan Kyerematen; the Minister of Energy, Dr Matthew Opoku Prempeh; a former Member of Parliament (MP) for Okaikoi North, Fuseini Issah, and a former MP for Awutu Senya East, George Andah.

Other personalities were the immediate past General Secretary of the NPP, John Boadu; the Chairman of the NPP National Council of Elders, Hackman Owusu-Agyemang; a former Chief Executive Officer (CEO) of the National Health Insurance Authority, Dr Samuel Annor; the CEO of the Ghana International Trade Commission, Frank Agyekum; the MP for Tema West, Carlos Ahenkorah, as well as past and present heads of government institutions.

Delivering the sermon on the faithfulness and mercies of God, a former Presiding Bishop of the Methodist Church of Ghana, the Most Rev. Dr Robert Aboagye-Mensah, urged Christians to put their faith and trust in God.

He noted that the faithfulness of God made the impossible possible, citing the story about Abraham and Sarah in the Bible who waited on the Lord for so long before they had a breakthrough.

He also urged Christians to believe in the promises of God and not allow crime and money to destroy the plans of God for their lives.

“You need to have strong faith in God through righteousness, as His plans are true and sure. To move forward with a God who is our Defender, we must have faith in Him,” he said.

The service had song ministrations by the Gospel duo, the Tagoe Sisters, which got the congregation on their feet, including Mr Boadu.

Prayers were said for Mr Ntim and his family, amidst the singing of hymns.

When he was given the podium to address the congregation, Mr Ntim, flanked by his wife and family members, delivered an emotional speech in which he thanked God and the church for its prayers and support.

Mr Ntim, who is also a member of the church, thanked the church members and its leadership for their constant prayers and encouragement in the period leading to his election as National Chairman of the ruling NPP.

He noted that their constant prayers and support brought him victory in the elections.

“I wish to thank the Lord and the congregation for such an awesome occasion for thanksgiving for my 64th birthday and for being elected as the National Chairman of the NPP. The Lord has been good to me, my family and all of us assembled here,” he said.

“In my own special way of thanking the Almighty God for bringing me this far, I will lie prostrate in the presence of the Lord,” he declared.

With that, he surged forward before the organist struck the chord for American composer Fanny Crosby’s “This is my story, this is my song” and lay prostrate while the song played.

He was joined by the family, with one of them rolling on the floor, an act that brought tears to some eyes in the auditorium.
Mr Ntim, who was in tears himself, lay on the floor for a while, giving thanks to God for His Goodness upon his life.

After the service, there was a dinner at the Ghana Institute of Management and Public Administration, which equally attracted a large number of NPP members and government officials.

The guests wined and dined while the Gospel trio, Daughters of Glorious Jesus, and the Gospel musician, Nicholas Omane Acheampong, thrilled them with some of their popular tunes.

At the dinner, Mr Ntim narrated his journey to the chairmanship and thanked his supporters and campaign team for their support.

Describing his thanksgiving as a double blessing, he said perseverance paid and, therefore, urged the people not to give up on their dreams.

“Commitment and staying focused eventually will be recognised. I, therefore, use this opportunity to thank God and all those who struggled with me, notwithstanding the frustration, disappointment and all the other difficulties,” he said.

“I’m more than convinced of the NPP’s long-standing tradition of rewarding commitment, dedication and perseverance and I'm extremely grateful. I pray that the young ones within the party will learn from my experience and give of their best to the party,” he said.

“Breaking the eight is very very possible if we all stick together and work hard for it. In all this, we shall keep on praising the Lord for His grace and mercies,” the NPP Chairman said.

Mr Ntim gave an assurance that the same tenacity of purpose with which he was able to go through the tribulations would embolden him to take the party to break the eight in 2024.