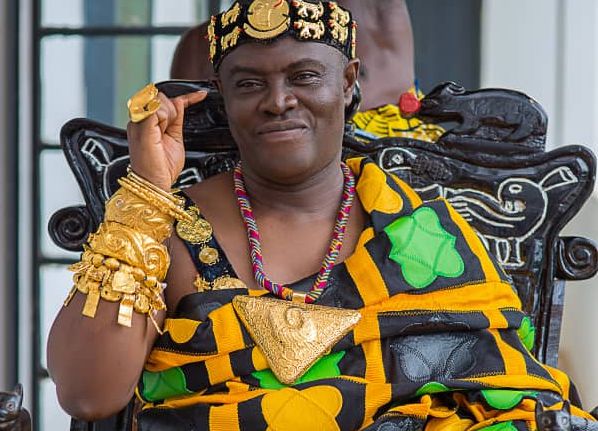 "I disagree with the section of Ghanaians who are against the legalisation of the Okada business in the country", he stated and pledged his commitment to support Mr Mahama to legalise the business if he won the December, 2020 polls.

Osagyefo Oseadeeyo Badu II, who is also the President of the newly-constituted Bono Regional House of Chiefs endorsed the legalisation of the Okada business, when the former president paid a courtesy call on him at his palace at Dormaa-Ahenkro on Thursday to end his three-day campaign tour of the Bono Region.

He explained that it was appropriate to legalise Okada business and expressed the hope that the legalisation of the business would help create jobs for the youth.

Osagyefo Oseadeeyo Agyeman Badu II explained that even in advanced countries such as China citizens were still in Okada business.

He also lauded Mr Mahama's decision to pay footballers and assembly members in his next administration.

Osagyefo Oseadeeyo Agyeman Badu II explained that assembly members played a key role in their various communities and should be given some allowance to motivate and support them to execute their community responsibilities.

He also said paying footballers would help bring relief to football club owners who sometimes struggled to pay their players.

Osagyefo Oseadeeyo Badu II called on the Electoral Commission (EC) to ensure free, fair and transparency in the processes leading to the December 7, 2020 election to avoid chaos after the results were declared.

"It is the mandate of the EC to ensure that the election is organised free, fair and transparent manner", he stated.

Osagyefo Oseadeeyo Agyeman Badu II challenged the EC to work hard to correct all anomalies that were detected during the just ended exhibition of the voters register to ensure free and fair election.

"Some of us saw the compilation of the new voters' register as unnecessary, but our message was ignored", he stated, explaining that he was against the exercise due to the limited time and the COVID-19 pandemic.

Osagyefo Oseadeeyo Agyeman Badu II appealed to the Ghana Police Service (GPS) to be diligence in the execution of their responsibilities because of this year's elections.

He however, accused successive governments for interfering in the work of the Ghana Police Service, explaining that when a member of a ruling party was arrested for committing a crime, politicians intervene for his or her release.

He encouraged the former president to advice his sympathisers to ensure the use of decent language in their campaigns to maintain peace and other.

Osagyefo Oseadeeyo Badu II commended former President Mahama for executing more development projects in the area and the nation as a whole during his administration.

He explained that the former president invested in the energy sector that solved the energy crises as well as investments in the aviation industry with the expansion of the Kotoka International Airport, Kumasi Airport and the construction of the Ho Airport.

On health, he explained since 1979 no government in the history of the country had within four years had built health facilities more than Mr Mahama's administration.

Osagyefo Oseadeeyo Badu II mentioned the construction of 1,016 Community-Based Health Planning and Service (CHIPS) compounds, 32 polyclinics, University of Medical Centre, expansion of Ridge Hospital, Dodowa Hospital and Shai Hill Hospital among other projects as some of the health facilities being constructed by the Mahama-led administration.

He explained that Mr Mahama performed better in terms of road construction, saying " in the history of Dormaa no government has constructed 84 kilometers of roads in the area expect NDC".

Osagyefo Oseadeeyo Badu II explained that he was enumerating the projects to challenge other Presidents to give off their best when voted into government.

He called for infrastructure development debate between the New Patriotic Party (NPP) and NDC to decide who performed better than the other.

For his part, Mr Mahama congratulated Osagyefo Oseadeeyo Agyeman Badu II for being elected as the first President of the Bono Regional House of Chiefs on Thursday in an election conducted by the house to elect the leader of the house.

"And I know that your election as a president is based on your solid records of achievements and contributions toward solving chieftaincy disputes" he stated.

Mr Mahama said he was at the palace to receive the chief's blessing after three days in the region and called for the counsel, prayers and support to ensure his victory.