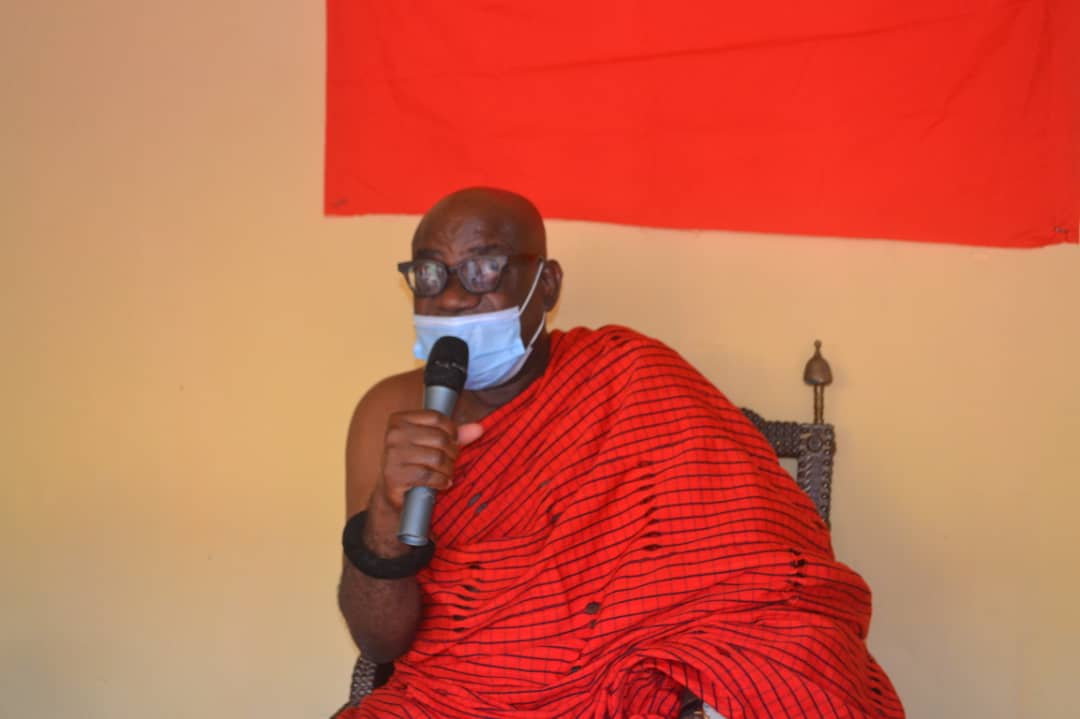 Following what the Chief of Agona Duakwa, Nana Kojo Amuakwa V, describes as "disrespect" and "disgrace" to the Agona Duakwa stool, he has banned the Member of Parliament (MP) for Agona East Constituency in the Central Region, Mrs Queenstar Maame Pokuah Sawyerr from campaigning in the town and its surrounding communities.

The National Democratic Congress (NDC) MP who is seeking re-election is said to have alleged paying some monies to the chief for a development project to which the chief failed to do.

Nana Kojo Amuakwa V has subsequently denied receiving any such money from the MP.

According to him, all chiefs, sub-chiefs and elders of Duakwa lands have been instructed to ensure that nobody allowed the MP, her supporters or agents to engage in political campaigns on their lands.

Addressing a press conference at his palace to announce the directive last Thursday, October 1, 2020, which was well-attended by representatives from smaller towns and communities, Nana Amuakwa V noted that any chief or elder who flouts the directive would be traditionally sanctioned.

He said “for the disgrace poured on my person, my ancestors, I swear by my oath of Nana Kojo Amoakwa’s Tuesday and hereby say that nobody should take this matter lightly and that anybody who goes against the directive must know the seriousness of the matter at hand.”

The Chiefs and elders who attended the event were clad in red and black cloths apparently to register their displeasure about the conduct of the NDC MP.

At the end, libation was poured and a sheep slaughtered to give traditional backing to the directive banning the MP from engaging in political activities at Agona Duakwa and its 41 smaller towns and villages.

Circumstances that lead to the ban

Touching on the circumstances leading to the MP’s ban, Nana Amuakwa V said that in the first week of December 2019, Duakwaman was informed that Mrs Sawyerr had made a public statement at Agona Dukwa that she gave an amount of GH¢20,000 and additional  GH¢2,000 to him [Nana Amuakwa] for the rehabilitation of the town’s refuse dumps.

He said that he had not received such money from the MP and therefore the statement amounted to defamation of his character which was duly reported to the elders at a meeting held on Saturday, December 7, 2019 at his palace.

He stated that after the meeting, Opanyin Kofi Mensah, an NDC executive member was sent to inform the MP to appear before Duakwaman to discuss the matter, adding “for over three months, she never honoured the invitation and by a letter dated March 23, 2020, which was copied to the NDC Constituency Chairman and the NDC Central Regional Chairman, we formally invited her to the palace on 15th April, 2020 for a discussion”.

“Per another letter dated 2nd May, 2020, we sent a reminder to the MP advising her that our meeting had been rescheduled to Saturday, 30th May, 2020 at exactly 4pm,” he indicated.

He stressed that on Saturday May 30, 2020, Mrs Sawyerr sent her executives to him but he told them that they had not offended him in any way and that they should return and inform the MP to come to the palace herself.

He pointed out that on August 11, 2020, his lawyers wrote to the MP, delivered the letter at Parliament House and a copy at her residence at Kwanyako and till date Mrs Sawyerr had not bothered to respond to the invitation.

He stated further that Mrs Sawyerr has shown gross disrespect to his person for refusing to respond to their several invitations and that she must understand that her comments amounted to defamation of character which is a serious offence.

“She has disgraced me as a chief and by extension my ancestors and the people of Duakwa and that if she does not respect my position as a chief, I also cannot respect her as an MP” Nana Amuakwa noted.

When Graphic Online contacted Mrs Sawyerr for her reaction, she noted that she had not received any official communication from the chief to the effect she had been banned from campaigning in the area.

She said “as the sitting MP for the area, I cannot be banned from going to any community and that it was only the leadership of Parliament that could ban her from going to some communities in her constituency.”