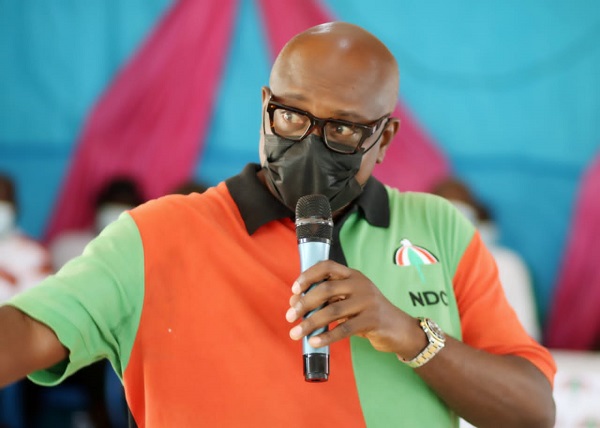 Team Kojo Bonsu, a group concerned with the reorganization of the National Democratic Congress (NDC) today met with residents of fishing communities at Nkekem, Everwere and Jomorro within the Axim municipality in the Western region of Ghana.

The fisherfolk community-based visitation and dialoguing is an integral part of the NDC's efforts of reorganization and remobilization processes geared towards the return of the party come at the 2024 general elections.

The Vice-Chairman of the Constituency, Matthew K. Essie expressed his excitement to the leadership of the team for choosing Axim as the venue of the dialogue, adding that they had been neglected over years.

In attendance were the former KMA Mayor, Hon Kojo Bonsu, former Minister of Information and Former Member of Parliament for Ablekuma South, Hon Fritz Baffoe as well as NDC constituency and branch executives in the municipality.

The former KMA boss, Mr Kojo Bonsu, acknowledged the warm reception from the good people of Axim and reiterated the need to kick out the "highly indebted yet nothing to show" NPP government.

In his speech, he said politics sometimes created a space of forgetfulness however the NDC remained compassionate about the plight of its members and Ghanaians in general hence the need to meet and dialogue on the way forward.

The former National Sports Authority boss revealed that many tend to forget that fisher folks are among the most skilled workers in the country, bemoaning the failure of the government to maximize gains within the fishery industry.

He used the opportunity to call on the government and other major stakeholders such as the Environmental Protection Agency (EPA), and the Ministry of Science and Environment to as a matter of urgency give needed attention to the industry by ensuring the enforcement of laws regarding pollution, premix fuel and illegal mining (galamsey).

As part of ensuring a healthy lifestyle for the participants, a medical team was deployed to have a free health screening exercise. Participants' blood pressure and Body Mass Index were checked and medical advice given accordingly.

Fritz Baffoe in a short message, said Axim is an important historical venue in Ghana and that the men and women within the fishing communities were very important to the course of NDC. He ended by saying that the NDC is there to listen to the people and effect their views in the reorganization process.

Among the isues confronting the fisher folks included fishing machines and premix fuel shared based on the basis of political party affiliation, the fishing close season, attitudes of some constituency executives, lack of jobs for the youth, lack of support for women in the fishing industry, lack of incentives for the fishermen during the close season as well as difficulties in accessing scholarships for students from fishing communities.