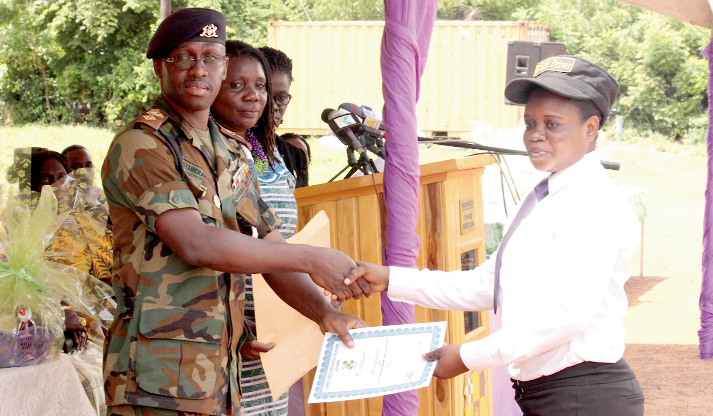 The Chief Executive Director of the African Women’s Development Fund (AWDF), Ms Theo Sowa, has advised women to develop their talents and build their potential to make positive impact on their lives.

She said every woman had the ability to celebrate her own achievement by effectively exploring her special hidden talents for the betterment of women in Ghana and Africa as a whole.

Ms Sowa made the statement at a ceremony to mark the end of a four-month free vocational training for 15 young women by the Network of Women In Growth (NEWIG) Ghana and EM power Foundation (EF), non-governmental organisations, in Accra last Friday.

The women had received training in driving, soap making, armed combat among other skills.

The training was organised in honour of the Late Madam Hawa Yakubu, a Former Bawku Central MP.

Ms Sowa said it was wrong to describe African women as poor, needy and impoverished people living in deplorable conditions because they had hidden talents that could be developed for the betterment of their respective countries.

Addressing the graduates, the Executive Director of NEWIG, Ms Mawusi Nudekor Awity, said the training was necessary because the rate of unemployment was high and women suffered most, adding that training women would enable them to earn capital for themselves.

Describing the programme as a “pilot plan”, she said “giving employable skills to women is the best way to eradicate poverty in the country”.

She indicated that in society, being a driver was perceived to be an odd job for women, adding that “women could be good drivers if they are properly trained.”

She said the trained drivers would serve in corporate bodies such as the embassies, ministries and other institutions, and pointed out that plans were underway to engage the trained drivers in transport business where they would own a bus to work with.

Ms Awity, therefore, lauded the effort by the Mechanical Transport School of the Ghana Armed Forces for the training and advised the trained drivers to be good role models in society to empower women to develop economically.

The Director of Education of the Ghana Armed Forces, Col. Felicia Twum Barima, explained that the practical demonstration of civil-military co-operation in skill training would allow the trained drivers to set unmatched standard in driving as pioneers and ambassadors of the “young women- in-driving” programme.

She made an appeal for the training to continue to benefit other young women in the country.