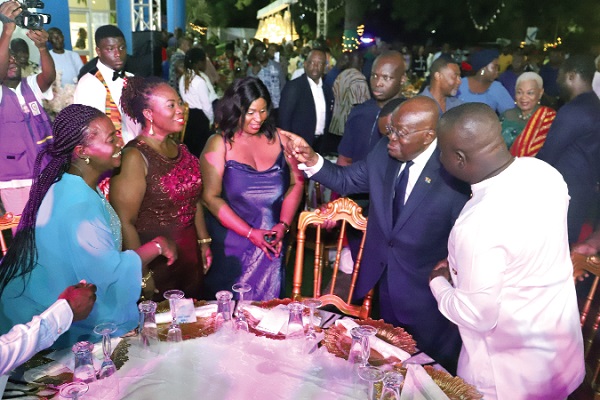 The President, Nana Addo Dankwa Akufo-Addo, has called on the media fraternity to uphold high journalistic standards, embrace training and critically engage society to help advance the development of the country.

“You should recognise the need for training, critical engagement of society, self-regulation and insistence on high media ethics and journalistic standards,” he said.

The President made the call at the maiden Ghana Journalists Association (GJA) Dinner on the premises of the Ghana International Press Centre in Accra last Wednesday night.

Decoupled from the awards event, the dinner brought journalists and media managers together to socialise and take stock of the year’s activities.

In attendance were personalities from various fields, most of them connected to the media, including veteran journalists Ajoa Yeboah-Afari; a former Managing Editor of the Daily Guide and Ghana’s Ambassador to Germany, Gina Blay; the Executive Secretary of the National Media Commission (NMC), George Sarpong; the Founder and Leader of the Salt and Light Ministries and friend of the media, Joyce Aryee.

Also present in their numbers were practising reporters, including some winners of the 2021 GJA awards.

Members of the diplomatic community were not left out, as were leaders of businesses, including the Chief Executive Officer of Tobinco Pharmaceuticals, Dr Amoo Tobin, government officials and the international evangelist, Rev. Dr Lawrence Tetteh, who opened the night with a prayer.

It was a joyous occasion, with good music dished out by the Ghana Police Band and performance by the renowned highlife musician, Pat Thomas, who kept patrons engaged throughout the entire event.

President Akufo-Addo, who pledged the government’s support for journalists, also appealed to the GJA to stick to facts and scrutinise comments and opinions on the ongoing discussions between the International Monetary Fund (IMF) and the government.

He said although the collaboration with the Bretton Woods institution was in the best interest of the country, as it sought to “repair, in the short term, our public finances”, some persons might want to paint the process black with misinformation to court bad affection for the government, hence the need for the media to separate facts from comments in the ongoing debate on the move by the government.

“I have an appeal to make, especially at a time when the dissemination of accurate information is so critical. You already know we have had to seek the collaboration of the IMF to repair, in the short term, our public finances.

“I would urge you not to fall prey to the schemes of such persons. Information regarding the ongoing process is readily available from the ministers of Finance and Information and I entreat all of you to assist in this endeavour on the basis of the well-established principle of facts are sacred, but comment is free,” the President said.

The President’s assurance to support journalists was in response to the GJA President, Albert Kwabena Dwumfour’s appeal to the government to support the Journalists Support Fund, which has been instituted to provide assistance for journalists who may come under attack during the discharge of their duties.

He said the fund was critical for the advancement of the freedom of the Ghanaian media and must be supported by all, including corporate bodies.

He took advantage of the occasion to formally introduce the winner of the 2021 GJA Journalist of the Year award, Portia Gabor, to the President, who congratulated her.