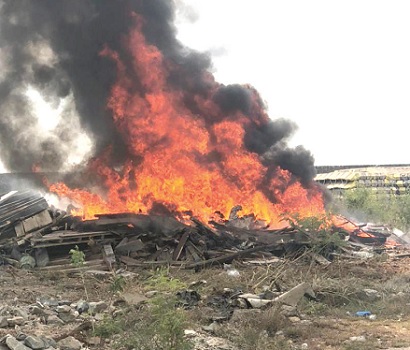 The Ghana Maritime Authority (GMA) has toughened its clampdown on illegal bunkering by destroying 20 jumbo canoes seized at the Home Port of the Western Naval Command.

A joint Navy, GMA and Marine Police operation led to the seizure of the boats, popularly known as “Dendey”, which are often used for smuggling large volumes of petroleum products for cash without licence or permit to operate such craft at the Takoradi anchorage in the Sekondi-Takoradi Metropolis.

The owners of the vessels bolted during the operation and in spite of the seizure of their boats, have refused to avail themselves, leaving the GMA with no option but to go through the process and destroy the boats to serve as a deterrent to other like-minded people.

Addressing journalists during the destruction of the boats, the Deputy Director-General of the Ghana Maritime Authority, Daniel Appianin, said the jumbo-size boats were constructed purposely for illegal bunkering activities, which had also become a national security threat, as well as loss of revenue to the State.

He said per the law, any person or entity that wished to build and operate a boat or had an intention to construct a boat or vessel used in the country’s maritime domain required permission from the State (GMA).

However, he said because of the illegal nature of their activities, the owners of those jumbo canoes did not go through the permitting process, but carried out the illegal trade under the cover of darkness and by that, evaded paying tax.

The products are referred to as ‘Remaining On-Board (ROB)’, because they are left in the vessels after the supply or after tanker vessels have pumped out their supply to the intended destinations.

The ROB, mostly between 10 and 20 tonnes, is then pumped out and illegally traded offshore without the payment of tax to the State.

Industry experts say it is a thriving business and has the potential of corrupting people because it has high profit margins, with the dealers making more than 100 per cent profit without tax.

The petroleum products, mostly diesel, are pumped from the merchant vessels at the anchorage using specially made canoes designed for that purpose, with the inside lined with plastic to avoid contamination and leakage. The fuel is then transported to filling stations in the

Takoradi Metropolis and other parts of the region and sold to unsuspecting members of the public.

The deputy director said the designers of the boats did not get the required approval because “it does not conform with the standards as required and the activities they use the boats for are also illegal”.

He explained that there were legal bunkering activities, but what the operators and their suppliers were engaged in was illegal. “If you want to engage in importation and bunkering of fuel products of any form, the said persons or entities should seek permission from authorities,” he said.

Mr Appianin, who is also in charge of Technical and Operations, said the GMA, after the seizure of the boats, sent circulars round in its quest to get the owners to own up and “we take it up from there, but because the owners are aware of the law, they don’t come”.

“We are, thus, destroying the boats to send a signal to other operators and to let them know that Ghana Navy, the GMA and the Marine Police team is still operating offshore and will come after them and those arrested will be made to face the law,” he said.

In October 2011, crews on board some merchant and supply vessels that called at the Takoradi Port engaged in illegal bunkering of large volumes of petroleum products at the port’s anchorage.