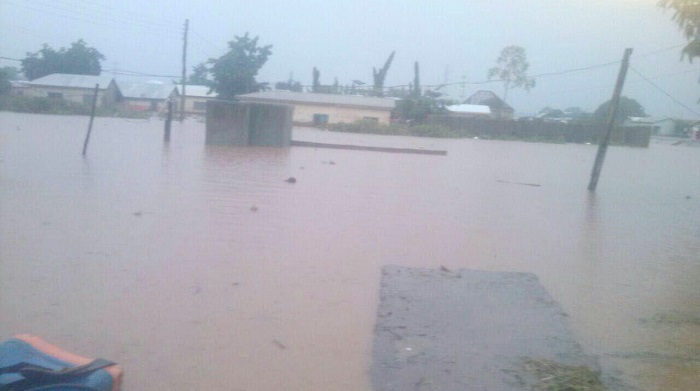 Some areas of the Tamale Metropolis covered by the floodwaters. Picture: SAMUEL DUODU
30.5k Shares

Hours of torrential rains in the Tamale Metropolis and the Sagnarigu District claimed the life of one person and displaced tens of people.

Property and food items running into thousands of cedis were destroyed.

The deceased, Azara Alhassan, was said to have been carried away by the floodwaters last Sunday when she slipped and fell into an open drain at Kunyevilla, a suburb of Tamale.

The body has since been retrieved and buried according to Islamic tradition.

Evidence of the devastation could be seen in the entire Kunyevilla suburb which was the worst hit in the metropolis.

Some of the residents, mostly women, were spotted drying their clothes, mattresses and electronic gadgets.

Some portions of access roads and a bridge that links Kunyevilla to Tamale were damaged.

The disaster has displaced about 900 people including children.

The Assembly Member for the Dungu Electoral Area, Mr Haruna Mumuni, told the Daily Graphic that about 200 houses were affected.

At Sawaba, some of the victims were seen trying to salvage what remained of their personal belongings and food items.

The Northern Regional Minister, Mr Abdallah Abubakari, accompanied by the Sagnarigu District Chief Executive, Mr Mohammed Sorogodoo, have visited the affected communities to empathise with the people. They also commiserated with the family of the deceased. The Northern Regional Coordinator of the National Disaster Management Organisation (NADMO), Alhaji Abduali Silimboma Naa, said officers dispatched to the affected areas were yet to submit their reports.

In a related development, the Northern Regional Office of the Ghana Meteorological Agency (GMet) has predicted more torrential rains within the Northern belt of the country from now till the third week of October.

The agency has, therefore, urged residents in the area to take precautionary measures to avert any further disaster. According to the Northern Regional Meteorological Officer, Mr Jacob Abdul Lambon, the rains are expected to be accompanied by thunder, lightning and windstorms.

He said the peak period for the rains in the Northern Region was usually in July but due to climate change it had now shifted to August and September.

Mr Lambon described Sunday’s rains in the metropolis as normal and explained that the floods recorded in some of the areas were as a result of negative human practices leading to choked drains and the construction of buildings on watercourses.