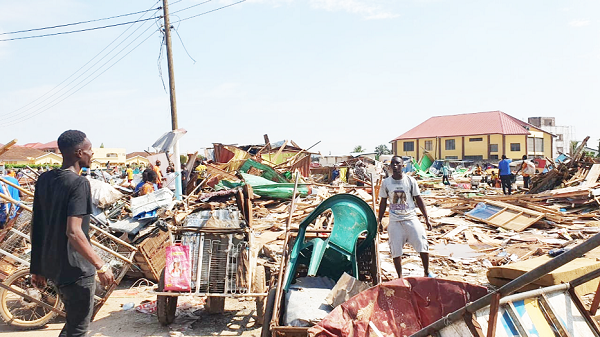 Some victims trying to salvage some property from the debris after the demolition. Picture: DELLA RUSSEL OCLOO

A slum community located in a prime area along the Spintex Road in Accra has been pulled down in a landmark demolition exercise carried out by the Tema West Municipal Assembly (TWMA).

Officials said the area was notorious for child prostitution and drug peddling, among other nefarious activities.

The exercise followed what the assembly said were the health hazards the squatters and residents of the area were exposed to during a recent fire outbreak in the slum, which destroyed some of the makeshift homes.

Located at the Kotobabi Junction, some 30 metres from the Ecobank Junction, the slum had for years been seen as a hub of the operations of alleged drug peddlers and syndicates of prostitution gangs and armed robbery.

The vibrancy of the slum saw a rapid development of a business enclave that hosted night clubs, food joints, drinking bars, clothing and hairdressing salons, pharmacies, among others, over the last decade which had impacted the regular vehicular traffic along the stretch.

Attempts by the Tema Metropolitan Assembly, which previously had jurisdiction over the area, and later the TWMA, were halted over reasons said to be humanitarian.

Some victims who spoke to the Daily Graphic lamented the manner the exercise was conducted last Thursday, saying they had no prior notice from the assembly.

A food vendor, Gloria Narteki, said she had barely started work about 9:40 a.m. when a heavy police deployment accompanied by bulldozers razed the area, pulling down every structure in sight, including her food joint.

“We don’t know the rationale behind the demolition apart from rumours we heard over the weeks that a popular church located along the stretch and an iron rod dealership company, which also has an apartment building on the stretch, had purchased the land,” Ms Narteki said.

She said she was saddened by the development because some of the residents were making a genuine living there and were not into any form of nefarious activity.

Some others affected by the demolition exercise were seen scavenging for their belongings from the debris.

The Chief Executive of the assembly, Ms Anna Adukwei Addo, told the Daily Graphic that the assembly took advantage of the fire outbreak incident to clear the area since it has had difficulties doing so in the past.

She debunked suggestions that the assembly failed to give ample notice to the squatters prior to the exercise.

She said the assembly would want to engage the Nungua Traditional Council, the custodians of the land, so they could find an alternative use for the land.

"My understanding is that it was earmarked for a market but with an already existing market at Batsoona, we will have to analyse and see what alternative arrangements could be done apart from a market," Ms Addo said.

She said the assembly was seeking to arrange for vocational training for many of the young girls who were within the settlement and had no skill set, and were thus being forced into alleged nefarious activities.

"We are trying to identify them through a registration process so we can begin some form of counselling for them while we arrange the skills training programme for them to enable them to earn incomes on their own," Ms Addo said.