Private sector to be at forefront of economic recovery - Prez 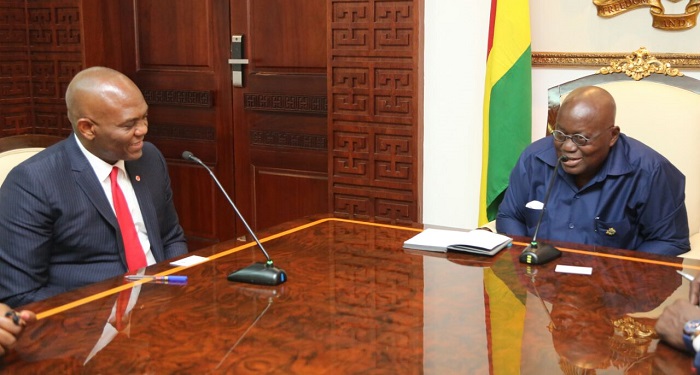 President Nana Addo Dankwa Akufo-Addo says the government’s first budget presented to Parliament recently is the clearest signal of its commitment to place the private sector at the forefront of redeeming the economy and enhancing growth, progress and prosperity.

“We have removed the many impediments there for businesses. We want to signal to the private sector that we mean business,” the President said.

He said the Ghanaian private sector was the way forward for the country, adding that the first budget had pointed the way the government was going to handle the private sector.

Receiving the Chairman of the United Bank for Africa (UBA), Mr Tony Elumelu, who called on the President to congratulate him on his victory in the December 2016 elections,  Nana Akufo-Addo said “we came in because the economy of our country had taken a nose dive.

“There was the need for a new direction. Our first task is to revive our economy, and put it on the road to growth and expansion,” he added.

The President said it was only by growing the economy that the challenges in the economy, principally youth unemployment, could be resolved.

“We want to grow our industry and our agriculture, and have a solid financial system that will support the growth of these two sectors,” he said.

He gave the assurance that neither the government nor its officials were in office to compete with businessmen.

“We are in office to facilitate and increase business confidence in Ghana, and by that, develop the country rapidly,” he stressed.

For that reason, President Akufo-Addo said “UBA is the kind of partner that we are looking for to assist us in the delivery of our vision and mandate.”

Building a Ghana without aid

President Akufo-Addo said Ghanaians admired the work that UBA had been doing, not just in Nigeria but looking beyond the borders to countries such as Ghana.

The President observed that UBA was the first Nigerian bank to set up in Ghana, during the era of President Kufuor, largely as a result of the positive business atmosphere created in the country.

He, therefore, reiterated his commitment to recreate a pro-business climate in Ghana to spur development.

Mr Tony Elumelu, for his part, assured the President of the bank’s support for the growth and development of the critical sectors of the economy.

He said the bank was poised to partner the government in providing every available support as the government worked to return the nation onto the path of progress and prosperity.

Mr Elumelu observed that investor confidence in Ghana was rising following the pro-business and pro-private sector approach adopted by the government.

He said the government’s policy thrust coupled with the initiatives announced in the 2017 budget were making Ghana the investment destination in the region.

“We are very happy about all of this, and we would like to associate ourselves with your government and support you to succeed, both in banking and in other sectors of the economy,” he said.

On the government’s one district, one factory policy, the UBA chairman indicated that the bank was prepared to support the government in the realisation of that vision.

“Africa lacks economic independence, and people like you, Mr President, can provide the new hope for Africa and we will stand by you. You have in us willing and capable partners who are proud and happy to identify themselves with you,” he added.