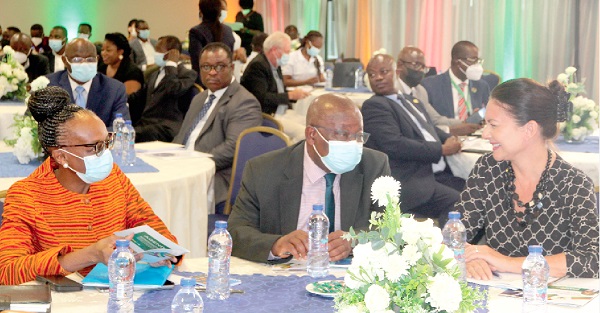 The Ministry of Health has launched a policy on the prevention and control of non-communicable diseases (NCDs), a public health burden in the country.

The 2022-2026 policy, initiated in collaboration with the Norwegian Embassy and the World Health Organisation (WHO), was launched at a strategic dialogue in Accra last Monday.

Among the objectives of the policy is to prioritise NCDs to achieve Universal Health Coverage (UHC) and the Sustainable Development Goals (SDGs) through partnerships.

It will also focus on the primary, secondary and tertiary prevention and management of NCDs, including interventions such as health promotion, education on physical inactivity, alcohol use, diet, nutrition and immunisation, screening and early detection, clinical care, rehabilitation and palliative care.

The meeting also discussed how to attain sustainable support to drive the implementation of the NCD agenda towards achieving SDGs 3 and 4 to reduce by half all NCD mortalities by 2030.

Participants included international and national partners, such as heads of missions and ambassadors; the Norwegian Ambassador to Ghana, Ingrid Mollestad; the Regional Director of the WHO, Dr Matshidiso Moeti; the Country Director of the WHO; Dr Francis Kasolo; the UNICEF Country Director and representative of development partners, Ann-Claire Dufey; members of the Parliamentary Select Committee on Health, heads of private and public health institutions and traditional leaders.

NCDs are the number one cause of death and disability in the world.

They refer to a group of conditions that are not mainly caused by acute infections but as a result of long-term health consequences that need a longer period of treatment and care.

Many NCDs can be prevented by reducing common risk factors such as tobacco use, alcohol use, physical inactivity and eating unhealthy diets, injuries, mental health disorders, among others.

Although 80 per cent of NCDs are preventable through healthy lifestyle choices, they account for 45 per cent of all deaths in the country, culminating in some 95,000 people with cardiovascular diseases.

The Director-General of the Ghana Health Service (GHS), Dr Patrick Kuma-Aboagye, said over the last 60 years, the prevalence of NCDs had increased by over 20 folds.

He said the prevalence rate of hypertension was 50 per cent and mostly affected people of 40 and above, while that of diabetes was 10 per cent.

“Sixty per cent of people reporting stroke, particularly at the Korle Bu Teaching Hospital, are under 50 years,” he added.

The Minister of Health, Kwaku Agyeman-Manu, said the government was committed to reducing premature deaths resulting from NCDs through multi-sectoral and collective impact approach.

He said the national dialogue provided an avenue for partners to discuss sustainable support towards achieving SDGs Three and Four.

The Norwegian Ambassador to Ghana commended the government for the initiative, saying: “Norway has your back as a proud partner.”