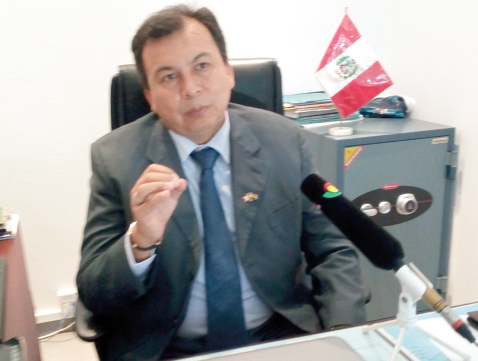 Peru is to partner Ghana in the fight against Illegal mining, popularly known as galamsey, and drug trafficking to strengthen security and bilateral relations.

That was because the two countries, according to the Charge d' Affaires of the Peru Embassy in Ghana, Mr Eliot Gaviria Valverde, experienced similar problems and a joint effort was the right approach to address them effectively.

Mr Valverde, while speaking to journalists in Accra, said just like Ghana, Peru had challenges of illegal miners degrading forests and destroying soil and biodiversity.

In Ghana, the illegal activities of miners have destroyed water bodies and on countless occasions led to the death of the illegal operators.

Peru, which is an important location for the cocaine trade, he said, was partnering Ghana to fight the menace, since Ghana had become a transit point for the drug trade.

Based on the similarities shared by the two countries, coupled with the economic dynamism of the South American region, Mr Valverde said Peru and Ghana were currently working on a political consolidation agreement.

He said the agreement, which is to forge strong bilateral relations between Peru and Ghana, both diplomatically and commercially, would enable the two countries to explore opportunities and share knowledge in the areas of agriculture, tourism, cultural exchanges, commerce and gastronomy.

The political consolidation agreement, he said, would serve as a legal framework that would guide the bilateral agenda between the two countries.

The process, which started a year ago, he said, was almost at the completion stages and the two countries had already exchanged proposals.

He explained that since 2014, the Peru Embassy in Ghana had established a relationship with the Faculty of Languages of the University of Ghana “and students studying Spanish have expressed interest in pursuing at least a one-semester course in a university in Peru”.

Based on that, he said, a draft institutional agreement had been prepared between the University of Ghana and one of the oldest universities in Lima, Peru, the National University of San Marcos.

The agreement, he said, would enable the two universities to exchange students, professors and knowledge.