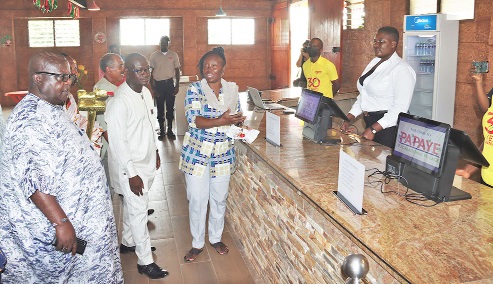 The Papaye Group, a fast food group of companies, has opened a recreational centre known as the Papaye Recreational Village at Konkonuru on the Akwapim Ridge in the Eastern Region, to the public.

The Eco-tourism facility would serve as a relaxation and event centre, and help to promote tourism in the country.

The inauguration of the facility, which occurred last Saturday, was part of festivities to celebrate the 30th anniversary of Papaye Fast Foods Limited.

The Papaye Recreational Village, which is located on a 130-acre site, has facilities such as a playing ground, zoo, restrooms, swimming pools, landscaping, outdoor auditorium, castle-like fences and gates, trees within their natural habitat, parking space, green serene environment and a museum, among others.

The Executive Chairman of the Papaye Group, Dr Samir Kalmoni, stated that the facility was one of the largest urban parks in the West Africa subregion.

He said it preserved an ecosystem of priceless value, which included the most beautiful rare species of trees, expressed a new landscape architecture, harmoniously combining the characteristics of a botanical garden with a contemporary planning concept for recreational parks in major cities.

The facility includes a garden of medicinal plants, friendly animals, children's play grounds, a sporting complex and a restaurant.

The architecture of the entrance gateway is distinctively traditional, while using contemporary materials combined with advanced technologies.

The Group Chief Executive Officer of Papaye Group, Divine Kwadwo Asiedu, expressed his excitement about the recreational facility, stating that it would bring numerous benefits to users.

These, he said, included improving the health and wellbeing of individuals, contributing to the empowerment of people and promoting the development of inclusiveness in the "GO GREEN" crusade.

Mr Asiedu said that a study by Penn State University of America showed the significant correlation to reduction in stress, lowered blood pressure, and perceived physical health, to the length of stay during visits to recreational centres such as the Papaya Recreational Village.

The facility will contribute to the community’s identity, provide active and passive recreational opportunities, appeal to all ages, contribute to the health and wellness of its patrons, creating valuable green space," Mr Asiedu said.