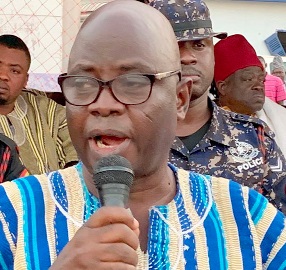 The Ministries of Agriculture and Trade and Industry are currently in talks with a private investor in a bid to revamp the defunct Zuarungu Meat Factory, the Upper East Regional Minister, Stephen Yakubu, has disclosed.

He said the move formed part of the government's One District One Factory (1D1F) flagship programme aimed at fast-tracking the country’s industrialisation agenda to boost the economy.

“If this new arrangement works out, it would create thousands of job opportunities for the teeming unemployed youth in the factory’s operational areas, to improve the living standard of the people,” he said.

Mr Yakubu disclosed this while speaking at the annual N’daakoya Festival of the chiefs and people of the Zuarungu Traditional Area in the Bolgatanga East District, last Saturday.

The well-attended event, which was on the theme: “Zuarungu homecoming, embracing the paramountcy for development", was attended by high-profile personalities and individuals who hail from the area.

The GIHOC Zuarungu Meat Product Company Limited was inaugurated by Dr Kwame Nkrumah in 1965 to produce canned beef for consumption domestically and for export.

It was, however, closed down in 1995 after 30 years of operation due to mismanagement.

“Let us, therefore, reposition ourselves for this important intervention and equally take advantage of other government intervention programmes to the benefit of our respective local communities,” Mr Yakubu urged the people.

He said the government would continue to create the enabling environment required to bring about the needed development to the area, with the ultimate aim of enhancing the livelihoods of the people.

Mr Yakubu said sustainable development could not be achieved in the wake of increasing teenage pregnancy, theft and robberies and alcoholism, particularly among the youth.

“Therefore, I wish to urge parents and community leaders to show moral authority and responsibility over the behaviour of the youth to forestall these negative occurrences for our mutual benefit,” he said.

He also entreated traditional rulers to stamp their authority on the social vices perpetrated by the youth, which continuously retarded the growth and development of the region.

He further commended the traditional council for celebrating the festival with the aim of rallying support from the people towards the development of the area.

The Paramount Chief of the Zuarungu Traditional Area, Naba Bilia Maletinga III, said the theme for the festival was carefully chosen as a wake-up call for the citizenry to rise and unite towards the progress of the area.

He said Zuarungu shared boundaries with its Talensi neighbours on the east and that a claim by their eastern neighbours that they were custodians of Zuarungu lands left much to be desired and was a threat to the peace in the area.

He added that since the creation of the Bolgatanga East and Talensi districts in 2004, there had not been proper demarcation, which had created anxiety among the people and had the potential to create conflict in the two districts.

Naba Maletinga appealed to the government to urgently work on the rightful boundaries between the two districts to prevent potential violence from erupting.

He further urged the physical planning unit of the district assembly to halt the haphazard development in the traditional area, as it could lead to inaccessible communities, adding: "I wish to further caution government officials involved in the sale of state lands to private developers in the area to stop, as the council will resist such actions."

The Paramount Chief of the Sakote Traditional Area, Naba Sigri Bemong, who chaired the occasion, implored the government to take the issue of boundary disputes seriously and resolve them immediately to prevent conflict.