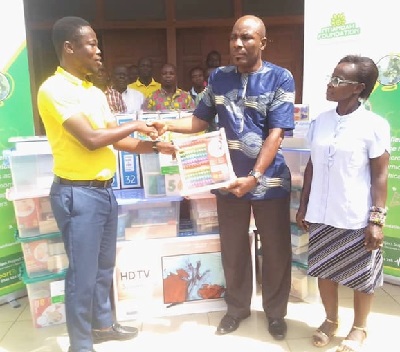 Each of the six basic schools received two digital television sets and two boxes of teaching and learning materials, while the beneficiary CHPS compounds had seven all-in-one desktop computers and seven 850 VA UPS.

Presenting the TV sets and educational materials through the Birim North District Education Directorate, the Project Officer of Ntiamoah Foundation, Shiva Oppong Banahene, said the gesture was aimed at exposing the children to different and exciting materials and to sustain them in their learning.

He said the organisation had already donated educational materials to 25 kindergartens in the district.

Mr Banahene advised the teachers to take proper care of the items and use them to raise the educational standards of the beneficiary schools.

The Deputy Director In-charge of Finance and Administration at the Birim North Education Directorate, Emmanuel Attipoe, who received the items on behalf of the beneficiary schools, thanked the Ntiamoah Foundation for the donation and urged the teachers to use the items for the intended purpose.

He admonished the teachers to take proper care of the items and use them to teach the pupils as officers would be detailed to monitor how best they were being utilised to raise the quality of education in the beneficiary schools.

He said last year, the foundation donated motorbikes to the six CHPS compounds to enhance the mobility of the nurses.

Ms Owusu thanked the donor for the gifts and said they had come at the opportune time.

She seized the opportunity to appeal to the NGO for vaccine fridges to store vaccines, as well as ordinary fridges to store other drugs such as oxytocin to keep their potency and also to save mothers’ lives.

Madam Owusu also appealed to other NGOs and charitable organisations for dressing materials which were scarce at the health facilities.