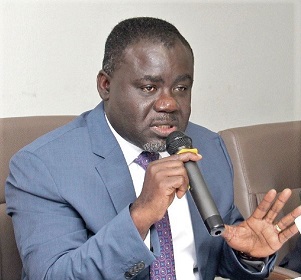 The National Road Safety Authority (NRSA) has rolled out “a regular engagement programme” with key stakeholders to make Ghana the safest hub of the transport industry.

The engagement also involves collating views and ideas to be factored into a broad policy framework to enhance the industry.

The programme, themed: “Harnessing creativity and innovation to transformational change in road safety management,” will also serve as a hub of ideas to engineer cost-effective and practical solutions to the issues that confront various regions.

“This year, we have seen a reduction in crashes, injuries and deaths for the seven months of 2022 and that we must work together to keep the reduction on the ascendancy and reward hard work,” the Board Chairman of the NRSA, Jermaine Nkrumah said.

He said the authority has begun engaging stakeholders on a scheme that will reward and appreciate safer regions yearly.

The board chairman said his outfit was committed to working with management to improve the authority’s funding situation.

The Minister of Transport, Kweku Ofori Asiamah, in a speech, said experts estimated that road traffic deaths and injuries in low-and-middle income countries would cause economic losses of up to five per cent of Gross Domestic Product (GDP) in those countries.

He said the provisional statistics from the NRSA from January to July, 2022 on road traffic crashes indicated that a total of 8,869 cases were reported involving 15,239 vehicles with 1,443 casualties.

Mr Asiamah said since the importance of road safety in the developmental agenda of a country could not be overemphasised, the ministry would double its effort in educating the populace to make the roads safe.

“We need strong institutions to exert control on the safety environment to build a firm safety culture for sustainable development,” he said.

Mr Asiamah gave the assurance that the authority would augment its capacity to increase its visibility beyond the regional capitals.

The Director of CSIR-Building and Road Research Institute, Dr Daniel Asenso-Gyambibi, said there were about 2,000 mortalities every year in the country as a result of road crashes.

He said since engineering was key in road safety, roads should be designed in a way that would be comfortable and friendly for drivers.

Dr Asenso-Gyambibi recommended that the NRSA be empowered to take active role in policy formulation in road network.