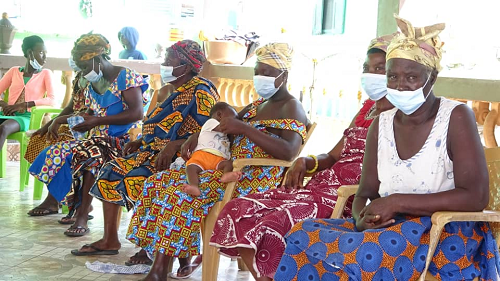 A section of the women
30.5k Shares

The Comprehensive Development Initiative, a Winneba based Non-Governmental Organisation (NGO) with support from the Trauma and Specialist Hospital has organised a free breast screening for women in three fishing communities in Winneba in Effutu Municipality.

The beneficiary women who were drawn from fishing communities such as Wonsom, Sekegyano and Penkye were also educated on the symptoms of breast cancer for detection, diagnosis and treatment.

Addressing the participants, the Executive Director of CDI, Ms Baaba Asibu said that the NGO was committed in eliminating all forms of barriers hindering the development of women within its catchment areas.

She noted that breast cancer as a disease had affected millions of women across the world and that it was important sensitization on the disease is increased to help control its spread among women.

She stated the disease had claimed the lives of many women which called for regular screening exercises for early detection of the disease among women to prevent its devastating effect on their health.

Ms Asibu disabused the minds of the women that the disease is a spiritual disease which often forced women affected by the disease to resort to spiritual support from pastors and fetish priests instead of seeking medical care.

“I wish to urge you all to report changes in your breasts to health professionals for medical attention instead of visiting prayer camps which often worsened the disease” she noted.

For her part, a Senior Nurse at the Trauma and Specialist Hospital, Madam Fatima Obosu noted that although breast cancer is the cause of deaths among many women worldwide, awareness level on the disease was still low.

She advocated for more sensitization of the disease to equip women in particular with the requisite information to help combat the spread of the disease.

CDI has a mission to promote gender equality through advocacy, sensitization and the empowerment of women and girls.

Since its establishment in 2018, it has been implementing activities and programmes aimed at educating and empowering women and girls including skills training for teenage mothers.