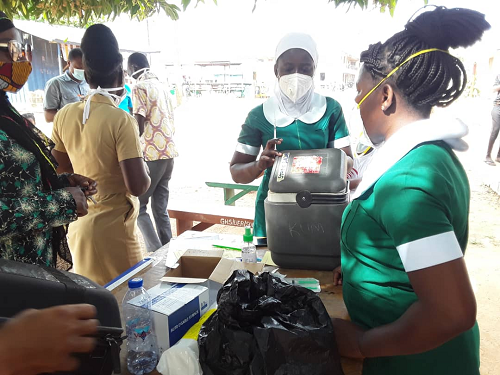 Some health personnel preparing to start the exercise at one of the health facilities at Bolgatanga
30.5k Shares

The Upper East Regional Directorate of the Ghana Health Service (GHS) has launched the Yellow Fever Preventive Mass Vaccination Campaign in the Region.

A total of 538,842 persons between the ages of 10 and 60 years are expected to be vaccinated in ten districts in the Region. The beneficiary districts are Bolgatanga and Bawku Municipalities, Bawku West district, Bolgatanga West, Builsa North and South districts, Garu, Pusiga, Binduri and Tempane districts.

The campaign which started on Thursday, November 12 ends on Wednesday, November 18, 2020. It is under the theme “Get vaccinated, be protected against Yellow Fever”.

A total of 1,545 volunteers made up of 898 health workers and 770 teams will man the various vaccination posts to ensure safety in the campaign.

Briefing the media at a short ceremony to launch the campaign, the Regional Director of the GHS,Dr Winfred Ofosu observed that the 2020 Yellow Fever Campaign which is happening in 85 districts in 14 Regions across the country will help reduce unimmunized children and provide a life-long protection to persons who will be vaccinated.

The exercise, he noted,will help accelerate the country's progress towards eliminating Yellow Fever by 2026 under the Global Strategy to Eliminate Yellow Fever Epidemics(EYE).

He cautioned pregnant women and seriously sick persons to avoid being vaccinated because they are not eligible while those below ten years of age and above 60 years are also not included in the exercise.

“The Regional Health Directorate and the ten health directorates have trained and equipped health workers to effectively implement this vaccination exercise with adequate arrangement to adhere to COVID-19 safety protocols," Dr Ofosu stressed.

The Director intimated that in 2010, a risk assessment was conducted in Ghana which identified all regions and districts to be at risk of Yellow Fever infection and over the years preventive vaccination have been carried out in some high-risk districts to improve population immunity and minimize any potential outbreak.

Globally, he noted, 47 countries, 34 in Africa and 13 in Central and South America are either endemic for, or have regions that are endemic for Yellow Fever. Within the last four years (2016-2019), nine countries have reported several outbreaks. They are Angola, Nigeria, Democratic Republic of Congo, Uganda, Kenya, Brazil, Surinam, French Guiana and China.

Dr Ofosu stated that the vaccines to be  used for the exercise are safe adding that one shot of the vaccine will protect an individual from Yellow Fever for the rest of his or her life.

He further appealed to the beneficiaries to avoid misplacing the Yellow cards after the vaccination exercise.

An Officer of the World Health Organization(WHO) Country Office for Ghana,Dr Rafiq Okine said some districts in the Region had already benefitted from the exercise in the past hence the current phase of the Campaign was limited to the 10 selected districts.
Dr Okine encouraged as many people as possible to take advantage of the exercise to help reduce the disease.

Yellow Fever is an infectious disease caused by a virus which is transmitted to humans by the bites of infected Aedes mosquitoes. The mosquitoes either breed around houses (domestic), in forests or jungles (wild), or in both habitats (semi-domestic). Once a person contracts the disease, the virus incubates in the body for three to six days.