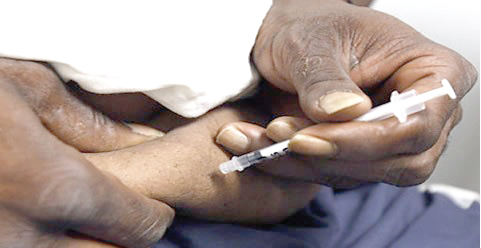 Diabetes is one of the four leading non-communicable diseases in Africa and in Ghana contributing to the increasing disease burden and mortality.

Described basically as a lifestyle disease, its lifelong socio-economic impact is the reason health experts continue to drum home the fact that if we make healthy lifestyle choices we could reduce our vulnerability by at least 90 per cent.

The risk factors of NCDs include unhealthy diet, lack of physical activity, use of tobacco, second-hand smoking, excessive drinking of alcohol and aging.

The Ghana Health Service (GHS) cautions that unhealthy diets and a lack of physical activity may show up in people as raised blood pressure, increased blood glucose, elevated blood lipids and obesity.

In recent times, the GHS says there has been a sharp increase in the prevalence of non-communicable diseases (NCDs) among people aged between 50 and 60 in the country but assured people that the problem could be resolved if they began making healthy lifestyle choices.

Further to projected behavioural risks, environmental and socio-economic factors such as air pollution, climate change, trade agreements and aggressive marketing of unhealthy products such as fizzy drinks, junk food, alcohol and tobacco among other products, were accelerating the NCD epidemic.

An estimated 86,200 persons die annually with nearly 55.5 per cent of the dead being less than 70 years and 58 per cent being males.

Because the disease could only be managed and not treated completely, he said it was important for people with diabetes to engage themselves in active physical activities to reduce the disease’s impact on them.

In 1991, the International Diabetes Federation (IDF) and the World Health Organisation (WHO) instituted World Diabetes Day (WDD), in response to growing concerns about the escalating health threat posed by diabetes.

The day is the world’s largest diabetes awareness campaign that reaches a global audience of over one billion people in more than 160 countries and draws attention to issues of paramount importance to the diabetes world, and keeps diabetes firmly in the public and political spotlight.

The day is marked every year on November 14, which is the birthday of Sir Frederick Banting, who co-discovered insulin, along with Charles Best, in 1922.

The theme for the 2020 WDD is: “The nurse and diabetes”, and the objective is to raise awareness of the crucial role that nurses play in supporting people living with diabetes.

The GHS says 95 per cent of all the COVID-19-related deaths locally are due to co-morbidities, meaning they had other health conditions that complicated their situation, leading to death.

It says NCDs, including diabetes, were major risk factors for severe disease and mortality in patients with COVID-19.

“These two epidemics are closely connected and act synergistically on morbidity and mortality: people with NCDs are more vulnerable to severe COVID-19 and death; COVID-19 and NCDs share a common set of underlying risk factors, including deprivation, obesity, old age and ethnicity,” Dr Aboagye said.

It has, therefore, advised Ghanaians to practise healthy lifestyles to stem the prevalence of NCDs, reduce their vulnerability to COVID-19 and help mitigate the impact of the global pandemic on national COVID-19 response.

Contributing to the write-up, Consultant Vitreo-retinal Surgeon, Dr Asiwome Kwesi Seneadza, and a business developer, Dr Michell Asima Francis, all of Agarwal’s Eye Hospital write that the body’s ability to produce the required amount of a hormone called insulin to control glucose levels in the blood causes diabetes, then later leading to major organ problems such as the eye complications.

There are broadly two types of diabetes: type one requires daily administration of artificial insulin by means of injection or insulin pump.

Type 2 is more generally managed by a combination of dietary control and medication in the form of tablets.

Diabetes is a major cause of blindness, kidney failure, heart attacks, stroke and lower limb amputation. In 2016, an estimated 1.6 million deaths were directly caused by diabetes. Another 2.2 million deaths were attributable to high blood glucose in 2012.

Complications
The eye is the earliest and most common complication of diabetic disease compared to other complications.
Hence those living with the disease are at high risk of losing their sight if proper care is not taken. Diabetic eye disease, among others, includes cataract which is a clouding of the eye’s lens.

Adults with diabetes are two to five times more likely to develop cataract and it also tends to happen at an earlier age in people with diabetes. Glaucoma is another disease that damages the eye’s optic nerve—the bundle of nerve fibres that connects the eye to the brain. Some types of glaucoma are associated with elevated pressure inside the eye. In adults, diabetes nearly doubles the risk of glaucoma.

Diabetic Retinopathy affects blood vessels in the light-sensitive tissue called the retina that lines the back of the eye.

As a result, the blood supply to the retina from these damaged blood vessels is reduced or cut off.

Diabetic retinopathy is one of the most common causes of vision loss among people with diabetes and the leading cause of vision impairment and blindness among the working population.

Maintaining blood glucose levels, blood pressure and cholesterol at or close to normal can help delay or prevent diabetes complications. Therefore, people with diabetes need regular monitoring. All forms of diabetic eye disease have the potential to cause severe vision loss and blindness.

It is possible to have diabetic retinopathy for a long time without noticing symptoms until substantial damage has occurred.

Symptoms may include blurry vision, difficulty reading, the appearance of spots—known as “floaters” in one’s vision. A person with diabetic retinopathy may also notice a shadow across the field of vision, eye pain or pressure, or difficulty with colour perception.

Some patients may experience a partial or total loss of vision. It is important to note that Diabetic Retinopathy usually affects both eyes.