A new headquarters for the Bolgatanga Divisional Police Command has been inaugurated with a call on people to support the police administration in addressing some of its basic infrastructural needs.

The Upper East Regional Minister, Stephen Yakubu, who made the call, said the government was doing everything within its mandate to provide logistical and othersupport to better the police service and that the onus lies with the citizenry to also lend their support in that regard.

He said “in order to ensure an effi cient and effective police service capable of dealing with crime head on, Ghanaians must augment the government’s efforts by contributing their quota to enhance their operations”.

Mr Yakubu, who was speaking at a brief ceremony to inaugurate the newly constructed and furnished office building, noted that effective policing was a shared responsibility and that the citizenry must religiously play their part in resourcing the police service to discharge their professional mandate without any difficulty.

Since the creation of the Bolgatanga Police Division two years ago, it was housed in a three room apartment which hitherto was used as a canteen for the persons.

As an immediate remedy, the immediate past Regional Commander, Deputy Commissioner of Police (DCOP) Dr Sayibu Pabi Gariba, spearheaded the construction of a befitting headquarters for thedivision.

Under the leadership of the current Divisional Police Commander, Chief Superintendent Dela K. Dzansi, with funds released by the police service, he solicited for other external support from individuals and institutions within the division’s operational areas towards the completion of the project.

The eight room office building, which was completed within three months, has an offi ce for the commander, canteen for persons, office of the Criminal Investigations Department (CID), places of convenience, among others. 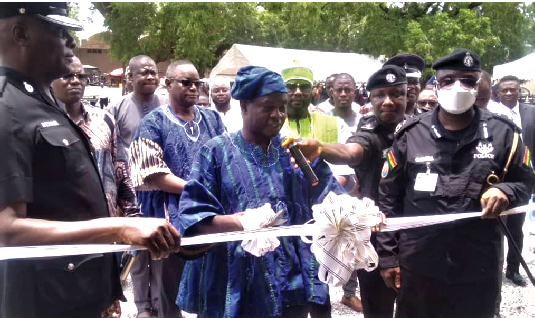 Mr Yakubu commended all organisations and public spirited individuals who contributed in diverse ways towards the completion of the facility, saying:

“This is the ‘can do spirit’ I want to see manifest among the people towards the growth and development of the region”.

“As a people, we have to take our destinies into our own hands and continue to make modest contributions to develop the region, since the government alone cannot address the challenges confronting the region,” Mr Yakubu said.

He further applauded the facelift already given to the Navrongo and Bawku police divisions which is contributing to fighting crime in those areas, saying:

“Let us continue to do our part as a people to improve the infrastructure of the police so as to attract more persons into the region.

He announced that an additional 183 police persons, who recently passed out, would be posted to add on to the numberof persons, to combat crime in the region, adding:

“The government will continue to do its best to equip and recruit more persons to protect the citizenry.

For his part, Chief Superintendent Dzansi, while commending the numerous benefactors of the project, called for continuous support from the public to the police to deal with some basic challenges.

Again, he lauded the outgone regional commander for playing an instrumental role from the conception to the completion stage of the project, stressing:

“I want to urge the public to be our trusted allies and support us to deal with crime decisively within the division to enable residents to go about their daily activities without fear”.