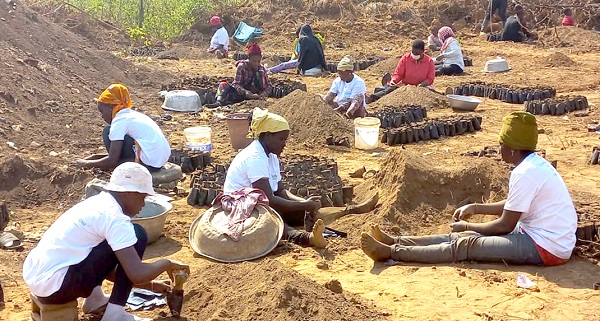 A total of 1,000 women will be employed by the Richie Plantations Limited, one of the contractors raising seedlings for the reafforestation module of the National Alternative and Livelihood Programme (NAELP) at the Terchire site in the Tano North District in the Ahafo Region from July this year.

The women would provide casual labour to the company to nurse the seedlings for the programme and also employ some 200 permanent staff at the site.

Already, about 300 women have been employed at the nursery site at Terchire.

This came to light when the National Coordinator of the programme, Dr Louise Carol Serwaah Donkor, paid a two-day tour of some of the project sites in the region to acquaint herself with the activities of the contractors and the implementation of the programme.

The NAELP is an initiative of the government through the Ministry of Lands and Natural Resources to provide employment opportunities for persons economically impacted by the fight against illegal mining in the country.

It is part of efforts to provide alternative livelihoods for the people and also help to reclaim the lands.

The field officer of the Terchire Nursery site of Richie Plantations Ltd, Mr Augustine Sackey, told Dr Donkor and her team that the site would also employ 200 permanent staff to manage the site and ensure the continuous nursing of seedlings to feed the programme and other projects of the company.

He said the target of the site was to produce a total of three million seedlings by June to support the Green Ghana Project and also help in the reclamation project of the NAELP.

He said the nursery was expected to produce a total of 1.5 million teak seedlings, one million Cedrela, 400,000 Ofram and one thousand Mahogany seedlings.

Dr Donkor, who was impressed with work done so far, was grateful to the chiefs and people of Terchire for releasing land to the government to undertake the programme to raise seedlings to reclaim the lands that had been destroyed by illegal mining activities over the years.

She said aside from the programme seeking to restore the lands, it would also in the process provide employment for the people, who had been affected by the government’s efforts to sanitise the mining sector.

She said the enthusiasm with which the people had embraced the programme was an indication that they were willing to stop the illegal activities that they were engaged in and help the government to reclaim the lands.

Though the programme would be supporting the Green Ghana Project with some seedlings, she said that was not the objective of the programme.

“Our main focus is to produce seedlings for the reclamation of the lands that have been destroyed by galamsey and also ensure that residents in communities affected have alternative sources of income to stop them from going back to illegal mining,” Dr Donkor explained.

She said it would also stop others from other places from engaging in illegal mining .

“If the indigenes themselves have stopped the illegal mining, there is no way they would allow someone from outside the town to do that,” she said.

The Chief of Terchire, Nana Okoh Agyemang Boakye II, also appealed to the government to expand the project to nurse more seedlings and employ more people.

He said since the project started, people from nearby communities were all eager to come to Terchie to find work and believed that if it was expanded, more people would benefit from it.

The team had earlier visited Fufuo in the Atwima Nwanbiagya North district where the company was nursing a total of 700,000 seedlings of Acacia, Teak and Mahogany.