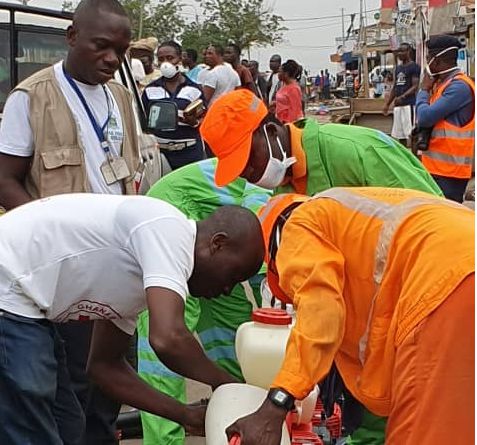 About 1,300 sprayers were deployed Monday morning to disinfect markets in the Greater Accra Region as part of efforts to help prevent the spread of the Coronavirus disease (COVID-19)

According to the Ministry of Local Government and Rural Development, 10 sprayers have been assigned to each market.

"In pursuant to the directives, a number of activities have been initiated including the disinfection of markets, public education initiation of market women on the COVID-19. In view of this, the general public is hereby informed of the disinfection of 137 markets in the Greater Accra Region on Monday, March 23, 2020," a statement issued by Ministry said.

At Kasseh in the Ada East District, GraphicOline's Benjamin Xornam Glover reports that the exercise started after 10 am due to the late arrival of the chemicals and other logistics from Accra.

Some of the traders at the Kasseh market in an interview with this reporter bemoaned the late start of the spraying exercise arguing that they had expected the officials to embark on the exercise at dawn to prevent the chemical from drifting to non-target areas by the wind.

Madam Dede Dugbatey, a trader said although the exercise was targeted at making the market safe, timing was of essence hence the organisers should have taken that into consideration to achieve better results.

All the markets would be reopened for business on Tuesday, March 24, 2020.

A Deputy Minister of Local Government Minister and Rural Development, Mr Osei Bonsu Amoah explained that all major markets in the country would also be disinfected after the Greater Accra exercise.

“It is supposed to be a nationwide exercise. We are starting from Accra today and we are hoping that during the week, all the other regions will also have their turn“, he said in a radio interview.

He said the exercise may continue into Tuesday should the sprayers leading the disinfection exercise fail to complete the task today, Monday, March 23, 2020.

“Usually, if you have such massive disinfection, obviously, the outcome will mean that you have to do some cleanup and if they are not able to finish today, then it means it may affect tomorrow. But we just earmarked a day for this exercise so that tomorrow, they can go back to the market,” he added.

Graphic Online's Victoria Kissiedu reported at about 10 fumigators were at the Kaneshie market as of 7:30 am on Monday.

Some armed military personnel were also seen sacking commercial drivers and some market women who had come early to offload their goods from the Kaneshie market to enable a smooth exercise.

The usual busy morning at the Mallam market as well as the constant traffic jam was non-existent Monday morning.

Graphic Online's Della Russel Ocloo reported that the exercise saw the Ashaiman Central market, the Valco Flats and the Afariwaa markets all in the Ashaiman municipality being closed to business.

Similar exercise, according to her was conducted at the Batsonaa Texpo market on the Spintex Road in the Tema West Municipality, as well as the Tema Community Two and Five Markets, European and the Adjei-Kojo Under-bridge markets all being fumigated by officials of waste management company, Zoomlion.

The Tema Community One Central Market, Tema Newtown, the Fish market at the Tema Fishing Harbour as well as the Communities Seven, Eight and Nine markets were all fumigated during the exercise.

Addressing the media in Ashaiman, the Greater Accra Regional Minister, Mr Ishmael Ashietey who was in the two municipalities to supervise the exercise said the move had become necessary in the wake of the rapid spread of the disease in Ghana.

According to him, the market centres with its associated crowded activities were vulnerable to the spreading of the disease.

“While I must admit that the respective assemblies undertake periodic fumigation activities to disinfect the markets of insects, rodents and other pests, the medical advisory team on the Coronavirus prevention recommended the fumigation of markets as one of the prevention measures,” Mr Ashietey stated.