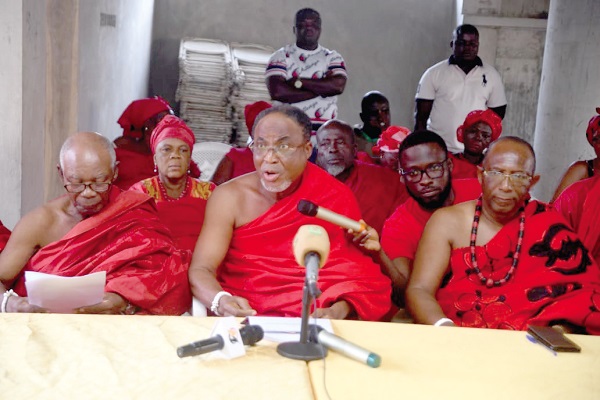 The kingmakers of the Gbese Stool have nullified the purported installation of Gbese Noyaa (development queen mother), Naa Ayikailey Adiagba I, as the acting Gbese Manye (Gbese Queen mother) under the name Naa Okailey Osa Manye I.

According to them, the installation should have been done in consultation with the kingmakers who have the right to endorse and approve a legitimate candidate to avoid conflicts, misunderstandings and chaos in the society.

At a press conference held in Accra, the Gbese Dzaasetse and Principal Kingmaker of the Gbese Stool, Nii Okai Kasablofo V, on behalf of the elders described the installation of the acting Queen Mother as disrespectful and against traditional customary practices and norms.

He explained that Naa Adiagba I, known in private life as Millicent Naa Ayikailey Okai, who was enstooled as a development queen mother by the Gbese Kingmakers, did not hail from the Nii Tetteh Ankamah We, where a Gbese queen mother should come from.

The Gbese kingmaker said the actions of Naa Ayikailey had, therefore, constituted disrespect and an indictment on the Gbese Stool and entire membership of the Gbese Dzaase.

He said she had, therefore, been stripped of her title as Gbese Development Queen mother and she no longer belonged to the Gbese royal family.

Nii Okai Kasablofo V said whoever deceived and misled the incumbent Gbese Manye to unknowingly and cunningly agree to permit those so-called rituals to be performed on Millicent Naa Ayikailey would be brought to book and face a court of competent jurisdiction to bring peace to the Gbese Stool.

He said those who took her through the installation process were also forbidden from holding any kingship titles in Gbese.

Nii Okai Kasablofo V said they were aware that the Gbese Manye, Naa Ayikailey Naa Noben I, had no right, mandate or authority to select someone to act in her position or on her behalf without the consent and knowledge of the Gbese Dzaase kingmakers.