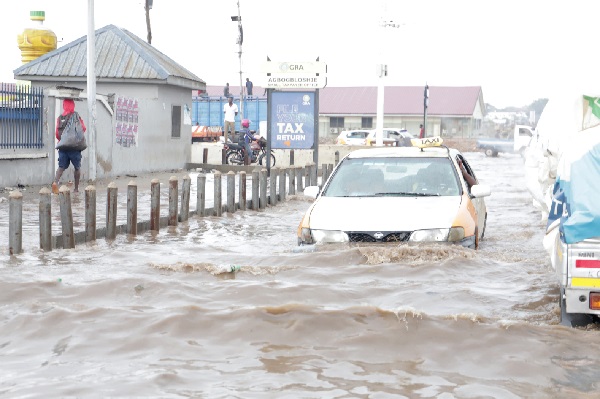 A taxi making its way through the flooded road at Agbogbloshie. Follow @Graphicgh

Parts of Accra were flooded yesterday after a downpour that lasted for about an hour and a half.

People sought shelter under buildings, bus stops and shops, while some were forced to vacate their workplaces.

About an hour before the rain, the Ghana Meteorological Agency put out a statement forecasting a thunderstorm in the morning.

“Moderate to heavy thunderstorm and rain activity detected along the coast of the Volta Region at 8:30 a.m. is expected to affect much of the southern parts of the country in the coming hours,” the agency stated. 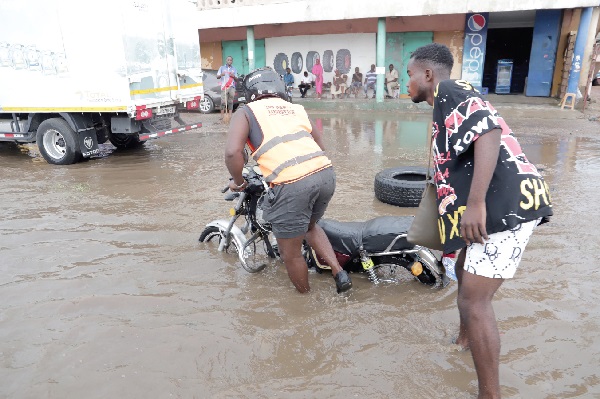 A rider and his passenger trying to salvage a motorbike from the flood.

Heavy vehicular traffic was experienced during the period as most roads were blocked to drivers and pedestrians due to the effects of the rain.

Some residents were seen with brooms and buckets fetching water and cleaning waste from the gutters for the free flow of water as the flood waters filled the frontage of their houses and shops.

Agnes Bekoe, a shop attendant at Adabraka, was seen mopping water from her supermarket. She told the Daily Graphic that the rain water always took over her shop when the gutters were not cleared before the rain started, hence the reason she was mopping out excess water from her shop.

“I managed through but the roads were flooded and choked along the Achimota route and I had no choice but to force my way and pass through it,” Robert, an Okada rider, said.

A spare parts dealer also disclosed that the rain water had flooded his shop. He called on the government to fix the drainage systems for rain water to flow freely, especially during the rainy season, to prevent flooding.

Minutes after the rain had stopped, people were seen coming out from where they had sought shelter at Circle to go back to their daily activities.

Plastic waste and rubbish were seen on the roads after the rain water had washed them there. The filth was all over the place.

The roads in front of the VIP and STC stations were also filled with water and waste and pedestrians had to wade through to get to their destination.