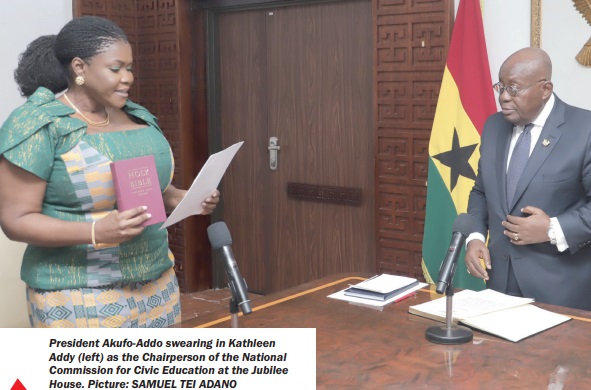 KATHLEEN Addy has been appointed as Chairperson of the National Commission for Civic Education (NCCE).

She takes over from Josephine Nkrumah who resigned her position to serve as an ECOWAS Ambassador to Liberia.

She was sworn in by President Nana Addo Dankwa Akufo-Addo at the Jubilee House in Accra yesterday, becoming the fifth Chairperson of the NCCE.

The President described Ms Addy as an activist with special interest in governance and human rights matters, adding that she also distinguished herself during her tenure as deputy chairperson of the commission after she was appointed in March 2017.

He, therefore, said: “With the vacancy as a result of Ms Nkrumah’s resignation, I deemed her qualified as the new chairperson”.

The President further said that Ms Addy had championed many causes for the promotion of democracy, good governance and human rights, including issues about women’s rights.

He commended Ms Addy for her dedicated service to the country over the years and wished her the best in her tenure.

President Akufo-Addo said the NCCE was a direct creation of the 1992 Constitution which stipulated the functions and membership of the commission which was established by Act 452 of the constitution in 1993.

He said all functions of the commission were important, and that Article 233 Clause ‘E’ of the constitution says it is to “formulate for the consideration of government from time to time programmes for national, regional and district levels aimed at realising the objectives of the constitution”.

The President said since its establishment some 29 years ago, the NCCE had done its part in educating the people to recognise the importance of their freedoms and civic rights.

“Some concerns had been raised in certain quarters about the effectiveness of the NCCE in the discharge of its functions and some have gone as far to advocate its abolishment.

“I am of a different opinion. I believe the NCCE will continue to be relevant, it still has an important role to play in helping to establish a culture of awareness in our country in which citizens are alive to their civic responsibilities and duties, especially at this time when some irresponsible elements within the body politic are calling for the overthrow of the constitutional order,” he said.

The President also added that “as chairperson, I need not remind you that you are not subject to the direction or control of any person or authority in the performance of your functions, including myself as the head of the Executive.”

He, however, urged the chairperson to pursue stakeholder consultations in the commission’s pursuit of its mandate.

Ms Addy expressed appreciation to President Akufo-Addo, the government and the people for the honour and confidence reposed in her, and gave the assurance that she would lead the commission to undertake its functions as prescribed by the constitution.

“In my view, Mr President, the commission is among the most important institutions in this country. It is a singular institution that is tasked with the responsibility of shaping the minds of the people, which is building the people who will build the republic; for good citizens are not born, they are made, and we have the task of building them.”

“For it is the good citizens that we build that will build the country that we desire. I will execute my mandate to the best of my ability and look forward to a renewed NCCE that will continue to have even greater impact on the country and its citizens,” she said.