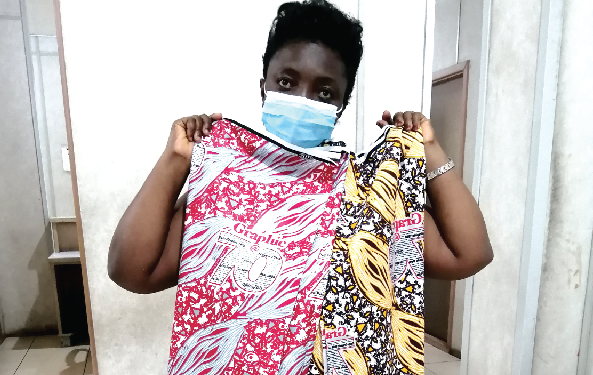 The Graphic Communications Group Limited (GCGL) will today unveil its 70th anniversary cloth as part of the raft of activities to climax the 70th milestone of the company next month.

The cloth, which comes in red & white and red & brown variants, was developed with a creative rationale that focuses on the operations of the company from 1950 to the present.

The twisted unbroken strands also represent intertwined cords put together to signify strength in unity of purpose and teamwork, the key pillars of the company’s core values.

The red & white variant of the cloth represents the company’s corporate colours, while the touches of platinum in the cloth stand for the colour for 70th anniversary celebrations.

For the brown variant, it can represent dark colours associated with maturity - 70 years.

Both shades of the cloth have our anniversary logo embossed and interspersed in them.

The Director of Human Resource of the GCGL, Ms. Peggy Addo, explained that all employees would wear the cloth today for its official unveiling, after which there would be photo sessions and a cocktail after close of work.

GCGL staff will also go on an anniversary float on October 2 (the actual date the company was established) through some principal streets of Accra to showcase the various brands of the company, after which there will be an anniversary cake-cutting ceremony.

Ms. Addo said the [email protected] loyalty promotion would also be launched on October 2, with four vehicles and consolation prizes given to the winners.

On October 24, she said, the seven-month celebration would be climaxed with an anniversary awards night and a ball.

“We are expecting the President, Nana Addo Dankwa Akufo-Addo, as the special guest of honour on that day. There will be a thanksgiving event in November to thank God for a successful anniversary year,” the director, HR stated.

Throughout the 70th anniversary celebrations, Ms. Addo said, staff had been placed at the heart of the event, and most of the activities were meant to foster enhanced camaraderie, teamwork and unity.

“This is because we have acknowledged that with effective teamwork and unity of purpose, Graphic will achieve its goals and maintain its competitive edge in the media space,” she said.

She said the employees of the company were its treasured assets and, thus, needed to be acknowledged for their significant contributions in making Graphic what it was.

Staff in the various regions, she said, had not been left out as they had actively participated in events.

“First and foremost, we are saying thank you to our stakeholders for your loyalty. You have supported us through thick and thin throughout the decades and have been loyal. You have consistently patronised Graphic products and built our brands into giants in the media space,” she said.

Ms. Addo intimated that after the anniversary celebrations, the public should continue to expect quality reportage in the company’s brands.

She stated that for instance, there was a new initiative, quarterly review, that had been introduced in the Daily Graphic to deepen the intellectual discourse. The first edition was published on Wednesday, September 23, 2020.

“The quarterly review departs from the regular coverage of news events and provides our cherished readers with articles that generate healthy discussions and deep analysis, as well as increase the knowledge and interest of readers,” she said, adding that “the public should look out for this new initiative every quarter and continue to remain loyal and patronise our various brands”.