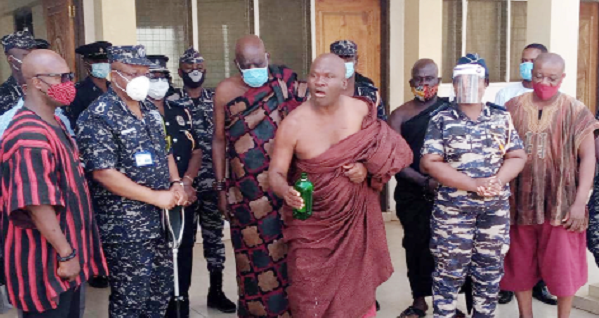 The Inspector General of Police (IGP), Mr. James Oppong-Boanuh, has stated that the police will deal with electoral offenders without bias should there be any such violations in the upcoming December general election.

He has, therefore, asked all aspirants in the December 7 presidential and parliamentary polls to educate their supporters on the negative acts that could lead them into trouble.

The IGP stated this when he called on the Central Regional Minister, Mr. Kwamena Duncan, at his office yesterday as part of a day's working visit to the region.

Mr. Oppong-Boanuh was in the region to assess the operational preparedness of the police in the run-up to the general election, and to work to bridge the logistical gaps where needed.

He was also expected to address some of the welfare issues of the personnel.

He said the police had resolved to work professionally without fear or favour, and to deal with all offenders irrespective of their political affiliations.

Mr. Oppong-Boanuh, who had earlier last Wednesday, paid a similar visit to the Western Region, urged the larger society to work towards keeping the country together in peace and in one piece before, during and after the general election.

Welcoming the IGP, the regional minister said Kasoa was turning into a recruitment point for people who were into all kinds of vices, and added that the area was a possible hotspot.

He said the Ajumako Enyan Essiam District — where there had been skirmishes of electoral violence in recent times — needed to be watched closely.

Later, when the IGP called on the Omanhen of the Oguaa Traditional Area, Osabarimba Kwesi Atta II, he urged the traditional authorities to help educate the youth to avoid being used by any person or group to engage in violence.

He urged the youth to report any major disagreements to the police, and encouraged them to rely on the traditional authorities to settle petty disputes rather than resorting to violence.

He pledged to continue to work professionally without fear or favour.

Mr. Oppong-Boanuh urged Ghanaians to be reassured that the police would work to protect lives and property at all times, particularly in relation to the upcoming elections.

Responding, Osabarimba Kwesi Atta pledged to work closely with the security agencies to keep the peace of the area.

He commended the Regional Commander of Police, Deputy Commissioner of Police Habiba Twumasi Sarpong, for her professional attitude to work and expressed the hope that her efforts towards peace would achieve maximum results.

The IGP later addressed officers and other ranks of the Ghana National Fire Service and the Ghana Prisons Service, urging them to be professional in their activities.

He encouraged them to work diligently and professionally to protect lives and property.

The IGP urged them to put what they had learnt into practice on the field for a peaceful election.