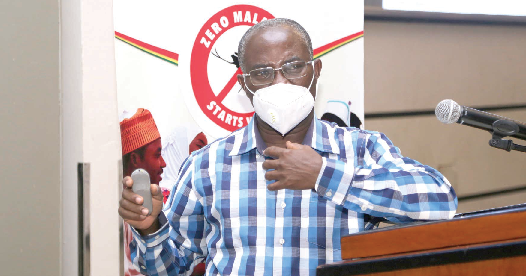 Ghana has recorded a reduction in malaria deaths in children under five by 83 per cent over the last eight years, the National Malaria Control Programme (NMCP) has said.

The Deputy Programme Manager of the NMCP, Mr. James Frimpong, who made this known at an Editors’ forum in Accra yesterday, said although malaria incidence was still high, the integrated approach deployed to control it had resulted in remarkable reduction in deaths.

The forum engaged senior journalists and editors who are the gatekeepers in the media space to play up issues of malaria to bring about behavioural change and also trigger the right intervention, investment and outcomes.

The journalists were also introduced to a “Zero Malaria Starts with Me” campaign launched across Africa in 2018 but which is yet to gather momentum.

Recounting some of the success stories of the NMCP, Mr. Frimpong said the deployment of various integrated measures to control the disease as part of the existing five-year malaria control strategic plan had led to an increase in both the ownership and use of insecticide treated mosquito nets (ITNs).

Mr. Frimpong said a new five-year strategic plan, 2021-2025, had been developed to replace the current one which expires in December this year.

It also intends to work towards reduction in all malaria-related deaths by 90 per cent by 2023 and reduction in malaria incidence by half by 2025. Both goals will use 2019 as the baseline.

Pre-elimination is when a district does not record malaria incidence for at least two years and the new strategy wants that to happen in at least six districts by 2025.

According to Mr. Frimpong, Ghana was still among the 10 countries in sub-Saharan Africa and 11 in the world that were contributing the most to the global malaria burden.

He said the country needed to continue with case management and surveillance, which deployed approaches such as the distribution of long-lasting treated mosquito nets, indoor spraying, larvae source management and seasonal malaria chemoprevention to eligible regions.

The National Programme Manager, NMCP, Dr. Kaziah Malm, said his outfit wanted more collaboration with the media to make malaria the foremost issue of national importance since the disease continued to be a leading public health concern.

She said in spite of the outbreak of the coronavirus disease (COVID-19), malaria infections killed many, prevented people from work and children from the classroom on a daily basis, hence the need to whip up national awareness for a concerted fight.

The President of the Ghana Journalists Association (GJA), Mr. Affail Monney, called on journalists to help spread the message on malaria to change the narrative about the disease in the country.

“Ours is to help move the paradigm and change the narrative of the malaria issue, it should engineer our agenda setting and we should de-emphasise the excessive politicisation of issues. We have the responsibility to use our influence to sharpen the focus of malaria reporting,” he added.