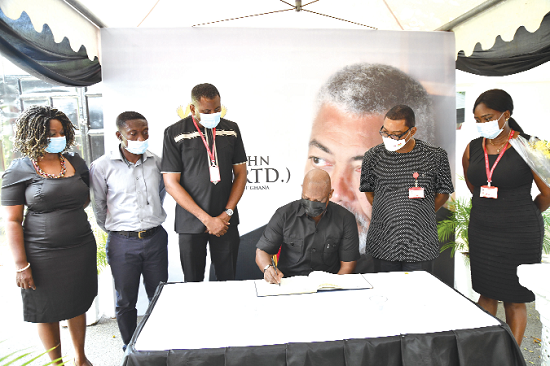 The Managing Director of the Graphic Communications Group Limited (GCGL), Mr Ato Afful, has eulogised former President Jerry John Rawlings, indicating that he was someone who served his people well.

He said history would not forget the legacies of the former President.

“We believe former President Rawlings was a man who served his country well. His humility was without doubt. His determination and commitment in doing what he knew to be right for his people and for this country cannot be lost on any of us who grew up as the children of Rawlings,” Mr Afful stated.

He paid the tribute when he led a delegation from the GCGL to commiserate with the family of the former President yesterday at their Ridge residence in Accra.

Former President Rawlings passed away on Thursday, November 12, this year at the Korle Bu Teaching Hospital after a short illness.

The funeral of the former President has been scheduled for December 23, this year at the Black Star Square in Accra.

Rawlings ruled the country from 1981 to 1992 as Chairman of the Provisional National Defence Council (PNDC) and from 1993 to 2000 as a democratically elected President.

The State Protocol Department also opened a book of condolence at the Accra International Conference Centre (AICC) in memory of the former President.

Personalities who have signed the book include President Akufo-Addo, Vice-President Mahamudu Bawumia, former President John Dramani Mahama, heads of religious bodies and present and past heads of security agencies.

Members of the public were also given the opportunity to commiserate with the Rawlings’ family by signing the book of condolence.

Mr Afful, who signed a book of condolence at the residence of the former President, noted that the death of Mr Rawlings came as a big shock to the Graphic Group, especially when a delegation of the company, about a month ago, had visited him (Rawlings) to express its condolences over the passing of his mother.

“Barely a month ago, we were here to commiserate with the late former President on this same ground over the death of his mother. He was in his usual ebullient spirit in spite of the loss of his mother. Therefore, it was such a huge loss and a deep shock to all of us,” he said.

“We are confident that history would judge us kindly and that the legacies that he left for this country would be witnessed through the ages,” he added.

On behalf of the GCGL, Mr Afful presented a token to the former First Lady, adding that the various brands of the company would support the family during the burial and funeral rites of the former President.

The delegation later presented a gift and some boxes of water to the bereaved family.

A member of the family, Dr Kwesi Djokoto, on behalf of the Agbotui, Agyeman and allied families, thanked the GCGL and Ecobank for commiserating with the family of the late former President.

According to him, the visit would go a long way to help ease the pain the family was going through.

He confirmed the December 23, 2020 date for the funeral, adding that it was agreed upon in consultation with the state, family and other stakeholders.