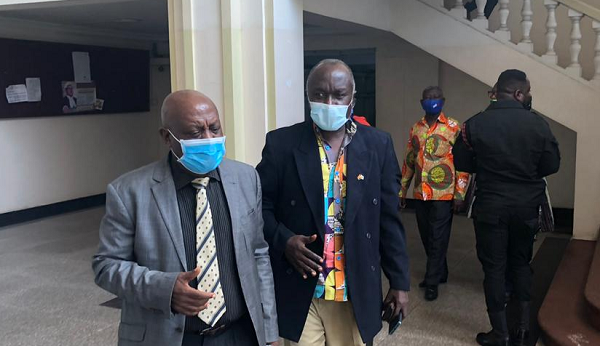 Mr S.K Boafo, one of the retired MPs leaving the court premises on Thursday morning after the court sitting
30.5k Shares

The Supreme Court has ruled that former Members of Parliament (MPs) do not have any constitutional right to receive pension.

Rather, the court held that former MPs are entitled to gratuities (which the court described as lump-sum payments) as stipulated in Article 114 of the 1992 constitution, reports Graphic Online's Emmanuel Ebo Hawkson.

In a unanimous decision Thursday, December 3, 2020, a seven-member panel of the apex court held that the Chinnery-Hesse Committee that recommended the payment of pensions to MPs who retired from 2005-2008 acted unconstitutionally.

“By the combined reading of Article 71(3), 98(1) and Article 114 of the 1992 Constitution, the Chinnery-Hesse Committee acted unconstitutionally,” the court held.

The decision of the apex court which was read by Justice Sule Gbadegbe, as his valedictory judgement, was in relation to a constitutional reference made by the Court of Appeal to the apex court l.

The Court of Appeal is currently hearing an appeal by 43 former MPs who are fighting for the payment of pension in line with the Chinnery-Hesse’s recommendation.

In 2017, the former MPs sued the government at the High Court for GH₵233,495 each, being their accrued monthly pension pay.

The basis of the legal action by the 40 former MPs was the Chinnery-Hesse Presidential Emoluments Committee (PEC) which provides that parliamentarians who were 50 years and above and exited Parliament, having served two full terms, should be paid some sums of money as pension benefits.

Video below shows, Mr S.K. Boafo, a former MP for Subin in the Ashanti Region speaking to Graphic Online

The former MPs lost a suit at the High Court and appealed at the Court of Appeal.

The Court of Appeal decided to make a constitutional reference to the Supreme Court to decide whether or not per the 1992 Constitution, retired MPs were entitled to pension.