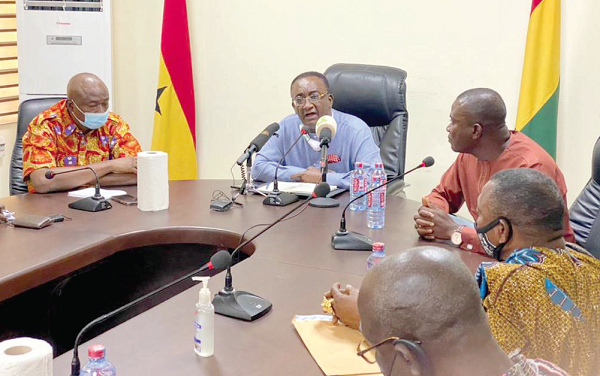 The project, which has been completed awaiting investors, is sited between Akuse in the Eastern Region and Torgorme in the North Tongu District in the Volta Region.

The Minister of Food and Agriculture, Dr Owusu Afriyie Akoto, said the rehabilitation would pave the way for commercial rice production, adding that some 110 foreign and local investors had expressed interest in investing in the project being implemented by the Ghana Commercial Agriculture Project (GCAP).

Addressing a delegation of chiefs and people of the Torgorme traditional area in his office in Accra, Dr Akoto assured them that in rehabilitating the area for commercial farmers, the ministry was mindful of the indigenes and, therefore, reserved enough portion of the irrigation land for them to farm.

The delegation, led by the Makrado of Torgorme, Togbe Gidi IV, met the minister to seek clarification on the prospects of indigenes who were interested in farming at the rehabilitated area.

They also sought the intervention of the minister to ensure that businesses that might arise from the project did not exploit the local workforce through low wages.

The minister appealed to the people of Torgorme to refrain from comments that might drive away potential investors.

“As a government, we cannot risk this investment with utterances made by local leaders,” he said, adding that some of the investors were worried about statements attributed to Togbe Gidi IV at an investment conference held at the project site.

He said Ghana had a reputation to protect, adding that “Ghana is the only one with democracy and foreign investors have confidence in the economy”.

Dr Akoto assured the chief and his people that apart from the opportunity created for the indigenes to participate in the farming, the project would provide employment opportunities for thousands of the youth.

“So you have absolutely nothing to fear that you are being denied. Rather, we are bringing opportunities for the youth and the farmers in your area,” he told the entourage.

He explained that the project area was a property of the government secured in the early 1970s which was not utilised fully until the current government decided to rehabilitate it for commercial farming.

“Unlike the first phase when the project was run as a social beneficiary project, this time it is purely commercial. The project has to generate money to pay for the loan and secondly to maintain the facility,” Dr Akoto explained.

Togbe Gidi IV thanked the minister for the invitation and gave the assurance that the people of Torgorme were not against the project but were concerned that they would not be considered in the scheme of things.

He said as the chief, he only echoed the concerns of his people and was happy that the ministry had taken into consideration the desire of the indigenes to farm at the project site.

The Project Coordinator of the GCAP, Mr Osei Owusu-Agyeman, appealed to the chief and the people at the project site to keep up the spirit of collaboration the project had so far enjoyed, assuring them that government would never undermine them.

He said the strategy was to create an economic zone and appealed to them to work with the management of the project.

The District Chief Executive of North Tongu, Mr Richard Collins Arku, was happy that the issues worrying the chief and his people had been addressed.