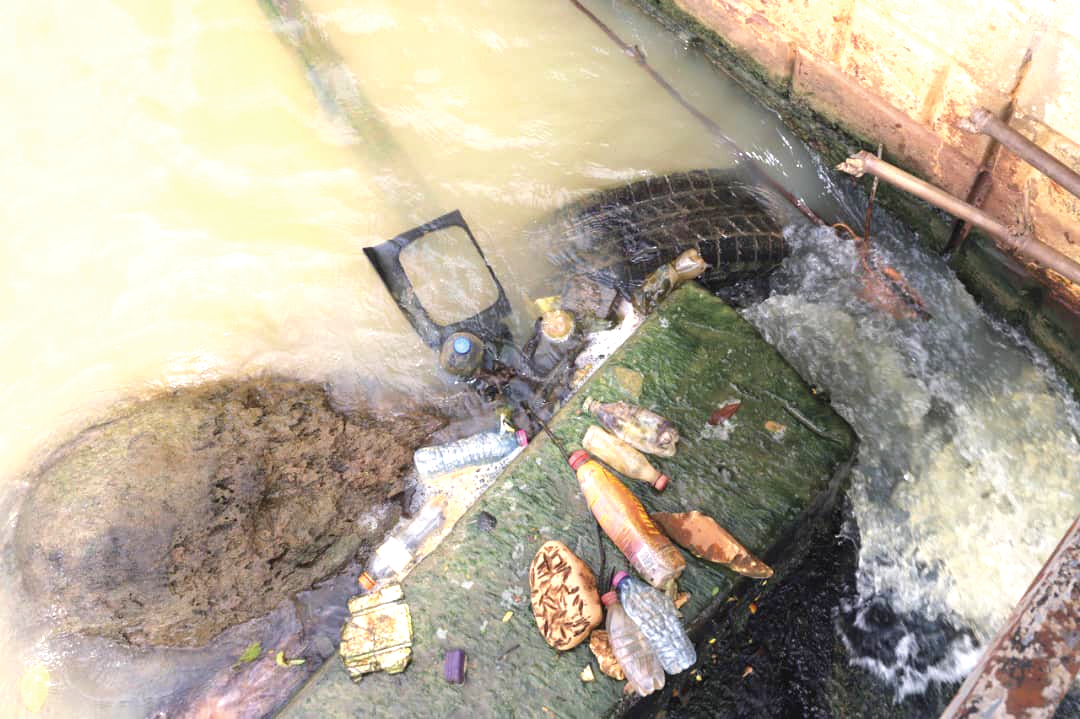 Pollutants such as plastic waste, rocks and car tyres have found their way into the dam, blocking free flow of the raw water into the treatment plant. Picture: EMMANUEL BAAH

The Owabi dam, one of two dams that serve as the main sources of water for millions of residents of the Kumasi Metropolis and its environs, has still not been desilted, two months after the minister of sanitation and water resources toured the area.

Over the years, the dam, which serves the north-western part of the Kumasi Metropolis including the Kwadaso, Asuoyeboah, Abuakwa, Nkawie, Akropong, and the surrounding areas, has suffered the impact of human activities including encroachment which has removed part of its forest cover and exposing it to environmental degradation.

One of its immediate needs is dredging to ease the insanitary conditions and also save residents from perennial flooding that threatens lives and property.

When the Daily Graphic visited the site of the dam and water treatment plant, which provides about three million gallons of water a day, it observed that the water body had been greatly impacted by waste.

The intake point of raw water was almost choked, leaving the water to overflow its retaining walls.

There were insoluble pollutants including plastics, making it difficult for water to flow freely.

Not only that, the intake point has also been silted with sand, clay and other materials deposited there by running water.

The danger is that the floodwater overflowing the walls of the dam heads straight to the laboratory attached to the treatment plant.

Interacting with some officials of the water plant who spoke on condition of anonymity, they expressed concern that if nothing was done immediately, the laboratory would be submerged by water and all its contents would be destroyed and the building itself risked collapsing.

"Our lab treatment site is likely to be shut down, if things continue this way.  We are in the rainy season and the dam keeps overflowing its banks anytime it rains heavily.

“The dam has levels – the upper, middle and down extraction points – the situation currently is that the down and the middle levels are not in use because as we speak, it is blocked as a result of the heavy silt.”

"So we are now using the upper intake point to collect water, as the silt inches up, it means that there would be no flow of raw water for processing the water which would overflow. Eventually, the plant has to be shut down,” the source said.

After touring the dam and water treatment plant in the Atwima Nwabiagya South District, Ms Cecilia Abena Dapaah said plans were underway by the government to dredge the Owabi and Barekese rivers.

“What is left is the feasibility studies, and fortunately for us, the studies are ready. The report is coming out in a week or two and then we will hit the road,” she disclosed.

According to her, the dredging works would commence with Owabi, adding that it had become necessary because of siltation.

“As you know, it was constructed with a depth of 22.5 feet and now we have 6 feet. So dredging is needed immediately so we are going to have it done,” Ms Dapaah said.

The minister said the ministry would engage indigenous dredging company, Dredge Masters Ghana, to carry out the dredging of the dam.

The community members say they were waiting for the arrival of the Dredge Masters Ghana to start work to save them – farming activities have been threatened due to the current state of the dam.

The Ashanti Regional Security Council in November 2019 also reiterated that the Ghana Water Company Limited (GWCL’s) water treatment dams at Owabi and Barekese remained security zones and would deal ruthlessly with anyone who encroached on lands belonging to the plants.

The Ashanti Regional Minister, Mr Simon Osei-Mensah, gave the warning in Kumasi following a tour of the facilities in the company of officials of the GWCL and the Parliamentary Select Committee on Works and Housing.

He said the dams, which supplied water to Kumasi and its environs, had come under serious trespass by encroachers, thereby threatening the survival of the dams.

When contacted, the Odikro of the Owabi community, Nana Kwame Awuah, also expressed worry about the situation, and that farms get flooded anytime heavy rains were recorded.

He made an appeal to the sector ministry and the government to, as a matter of urgency, commission a dredging company to save the community and its environs.

“If they do not dredge, what would happen is that our farm produce would continue to be destroyed by the flood, the water system and other installations which are already threatened would have to be shut down.

The Owabi Dam built in 1926, with a depth of 22.5-feet, has currently been narrowed and reduced to 6.5-feet due to human activities.

This follows the disposal of solid waste into the dam and the washing of toxic chemicals from farming activities along the banks into the dam.

Developers in the town and other city centres have also resorted to sand winning activities and other unacceptable practices that threaten the dam.