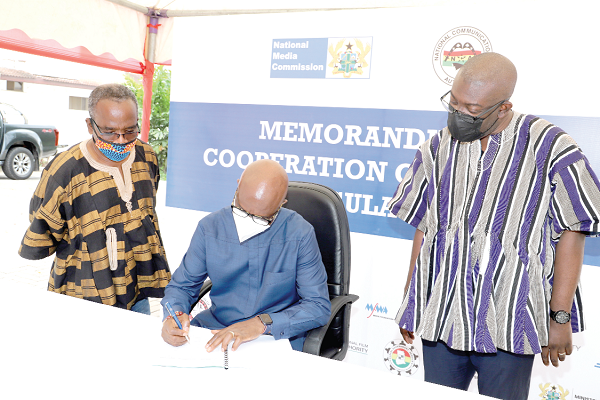 The National Media Commission (NMC) and the National Communications Authority (NCA) have signed a memorandum of cooperation (MoC) with some stakeholders in the media industry to sanitise the airwaves, pending the passage of the Broadcasting Bill.

The partners comprise civil society organisations (CSOs) in the media and some regulatory bodies, such as the Ghana Journalists Association (GJA), the Ghana Independent Broadcasters Association (GIBA), the Bank of Ghana (BoG) and the Ghana Police Service.

The cooperation, which is under the auspices of the Ministry of Information, also has the Media Foundation for West Africa (MFWA), the Ghana Armed Forces, the Gaming Commission and the Judicial Service of Ghana as collaborators.

It is to enable them to collaborate to monitor programmes on radio and television to ensure that those that are an affront to the law, culture and values of the people are not aired.

They will also deal with matters of general fraud, money doubling and baseless claims, among other irregularities.

The Executive Secretary of the NMC, Mr George Sarpong, signed on behalf of the Commission, while the Director-General of the NCA, Mr Joe Anokye, signed for his outfit.

The outgoing President of the GJA, Mr Roland Affail Monney; the Executive Secretary of GIBA, Ms Gloria Hiadzi; the Executive Director of the MFWA, Mr Sulemana Braimah, and Colonel Eric Aggrey-Quarshie, who represented the GAF, signed on behalf of their respective establishments.

The Minister of Information, Mr Kojo Oppong Nkrumah, said there was the urgent need to cure the “very poor collaboration” between the NCA and the NMC, given their individual uniqueness.

He explained that although the NCA had punitive powers, it did not have the power to regulate content, whereas the NMC had regulatory powers but lacked the power to sanction defaulters.

“The gap still exists where you see content on our broadcast network and the NMC is unable to do more than recommend, discuss and engage. The sad thing is that in spite of our initial meetings and conversations, the infractions still continue on our broadcast platforms today, but the NCA is unable to act because the collaboration has not taken place yet,” the minister said.

He, therefore, urged the various institutions to get to work immediately to deal with the myriad of irregularities that had plagued the broadcasting space.

“Our expectation is that this will not just be a perfunctory framework but that you will actually put this committee in place and have some regular meetings to deal with specific emerging issues that may be coming up,” Mr Oppong Nkrumah added.

He further charged the NMC to leverage technology to widen its scope of receiving complaints to include e-mails and telephone calls, instead of relying solely on written letters.

Mr Sarpong said although there was the need to defend the right to free expression at all times without compromise, it was also necessary to safeguard the safety of society by protecting consumers and ensuring decency on the airwaves.

He observed that the media had, over the years, used the opportunity of free speech to do “a lot of good works”, but said there was a small group that was abusing the space.

According to him, some people were using the media to undermine the works of institutions such as the BoG and the Gaming Commission, hence their involvement in the MoC, even though they were not direct industry players.

“So almost every organisation here is doing some work that is affected by the media. We have seen some using radio and TV to do money doubling and things to do with money, which is the work of the BoG. We are seeing people use the media to sell lotto numbers, which is the work of the Gaming Commission, and we have also seen people use the media to commit fraud, in which the police has interest,” he said.

For his part, Mr Anokye expressed the hope that the agreement would enable the NCA and the NMC to work efficiently to ensure harmony.

“There is a line of benefit in this MoC and I can state here that it provides a mechanism for the state to address challenges in the broadcast media,” he said.