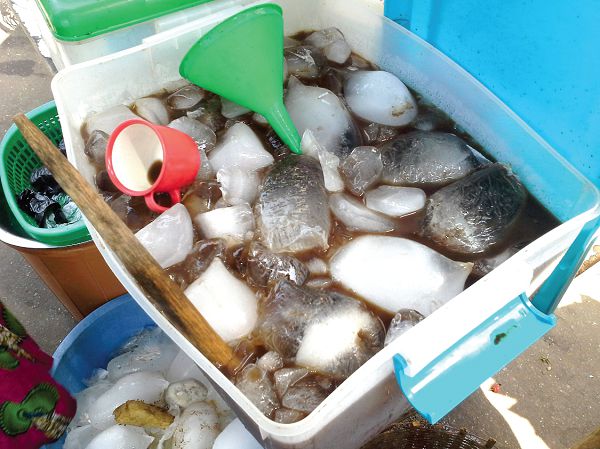 Lamugin, popularly known as Hausa beer, is one of the oldest and most widely consumed non-alcoholic beverage within Muslim communities.

It is very common to find the beverage which is often sold in huge calabashes or bowls with ice cubes at the market place, bus terminals, public schools and on the streets.

In this era when our desire for using plastic bottles keep increasing, the Hausa beer is being migrated gradually from the calabash to plastic bottles of various sizes or tied in plain rubber.

Unlike the traditional beer brewed with cereal grains —most commonly from malted barley, wheat, maize, rice and tubers such as cassava, the major ingredient for Hausa beer is tamarind, also known in Hausa language as Samia.

Most often we see imported drinks made with tropical fruits such as tamarind, and assume we don’t have the raw fruit here in Ghana.

Yes! Tamarind is all over us; just go to the Nima Market, Maamobi Market, Madina Market, Ashiaman Market and Mallam Market in Accra and see the number of people selling tamarind.

They can equally be found in the Zongos in the rest of the regions.

Tamarind is a hardwood tree known scientifically as tamarindus indica.

It is native to Africa but also grows in India, Pakistan and many other tropical regions.

In Ghana, the tamarind fruit comes from the Northern Region and neighbouring countries such as Burkina Faso.

The pulp of the young fruit is green and sour.

However, as the fruit ripens, the juicy pulp becomes paste-like and more sweet-sour.

On the market, you will find the tamarind fruits rolled in balls.

Some look black and others look brownish.

However, the taste is the same when used for drinks.

Preparation of Hausa beer Hajia Fati Shaibu has been selling Hausa beer for the past 27 years.

Currently, she has six point of sales in Accra.

The preparation of the beer is done in her house at Accra New Town and the final product sent to Nima, Mamobi, Madina and Abeka Lapaz for her girls to sell.

According to Hajia Fati, the preparation is done by soaking the desired quantity of tamarind in water for about an hour. “Then you blend together a mixture of chopped ginger, soaked cloves and water.

The blended mixture is added to the soaked tamarind and strained into a bottle, or if it is in large quantity into a big bowl.

You then add some freshly squeezed lemon or lime to it if you want it to taste a bit tangy.

Finally, you add sugar to taste and more water if need be,” she explained.

She added that if it is in a bottle or jar, you can just refrigerate it.

However, if it is in large quantity, you add some ice cubes and serve to consumers.

“You can get Hausa beer with just 50 pesewas and more.

The good thing about it is that it is a healthy drink.

Once you have sore throat and you take it, you are sorted.

Tamarind is traditionally used to treat diarrhoea, constipation and fever.

Therefore, those who know the health benefits love to enjoy the beer,” she stated

These days, it has become fashionable to see people serving lamugin at weddings, birthday parties, engagements and corporate events.

It is displayed in a big calabash with ice for people to enjoy.

Gradually, some of the restaurants and hotels are adding lamugin to their drink lists.

The next time you go for an event, just look out for some chilled lamugin and enjoy.