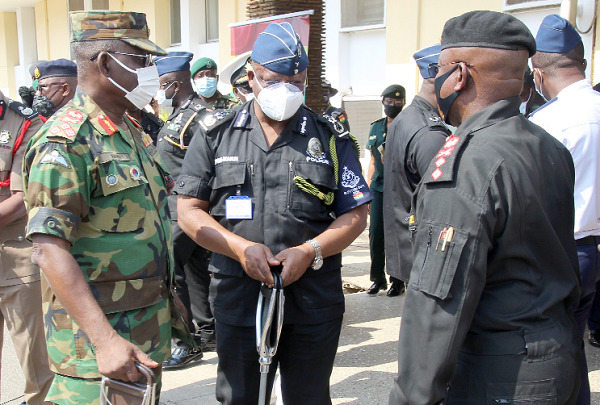 The National Election Security Task Force (NESTF) has said all the violent incidents recorded during this year’s elections are being investigated.

It said the outcome of the investigations would be duly brought to the notice of the public.

The Chairman of the task force, the Inspector General of Police (IGP), Mr James Oppong Boanuh, at a media briefing at the Joint Operations Centre at the CID Headquarters in Accra yesterday, said despite all the measures put in place and the education of the public, some violent incidents, involving mainly civilians, were recorded.

“It must be emphasised that the conduct of this year’s elections was not devoid of some violent incidents which nearly marred the smooth conduct of the elections.

“This resulted in five deaths and injuries to 17 people, including security officers,” the IGP emphasised, and extended the condolences of the task force to the bereaved families, while wishing the injured speedy recovery.

The Chairman of the NESTF said the team, in accordance with its mandate, had instituted appropriate security measures to guarantee maximum security in the country, even after the elections, to preserve the peace and safeguard lives and properties.

He, therefore, warned troublemakers to desist from perpetrating any acts of violence because the task force would deal with persons or groups who intended to foment trouble.

“We will continue to maintain law and order during the post-election phase to ensure that people go about their normal activities devoid of intimidation and attacks.

“Let me sound a word of caution to any person or group of persons who intend to foment trouble to desist from such acts because we will deal decisively with such elements, in line with the laws of the country,” he said.

The IGP, who spoke on behalf of the team, was grateful to all stakeholders, including the various sister security agencies, for their support for the task force during the period of the elections and after.

The core election duty, he pointed out, was at the polling stations and collation centres where personnel of the various security agencies were deployed without the involvement of the military.

“The military, together with the various operations units of the Ghana Police Service, was deployed for back-up in emergency situations. The military was not involved in the duties at the polling stations but was called in under rapid response and emergency situations only,” he indicated, stressing that “the impression being created that the military was used at the polling stations is, therefore, not correct”.

He expressed gratitude to the international community, civil society organisations (CSOs), the security agencies and the citizenry for supporting the task force in diverse ways to effectively discharge its mandate during the elections and gave an assurance that the security agencies would not relent in their quest to maintain the peace and serenity for the development of the country.

Last Wednesday, the NESTF reported that five persons had been killed following election-related violence after the December 7 elections.

It explained that apart from one incident that involved a security person, the five other shooting incidents involved civilians, and that the task force was going to investigate the incidents.

"Twenty-one of the incidents are true cases of electoral violence, six of which involved gunshots, resulting in the death of five," it said.

Another incident was recorded at Ablekuma Central, where four people, including a policeman, were injured during a shooting incident at the collation centre during the post-election period last Tuesday.

Two people lost their lives and four got injured in Techiman South following shooting by security persons at the collation centre, while another incident was recorded in Savelugu when some people besieged the police station and, in the melee, some gunshots were fired.

The NESTF condemned the occurrences, stressing that the incidents recorded could have been avoided.