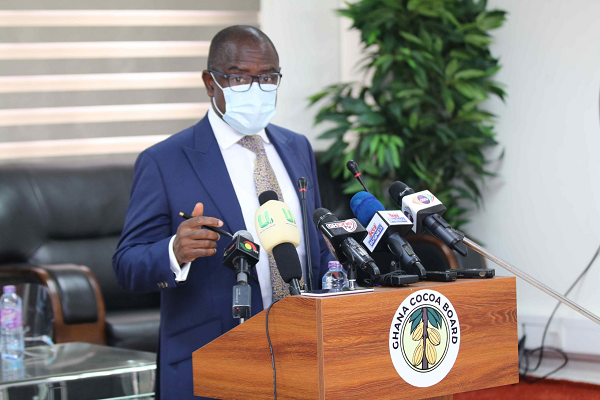 A cocoa farmer's pension scheme will take effect this month.

The scheme will enable registered cocoa farmers in any part of the country to set aside a portion of their income for investment towards retirement, ill health or incapacitation.

It requires farmers to contribute a minimum of five per cent of their cocoa produce and a maximum of 15 per cent into a special fund to be managed by a board of trustees appointed by the Ghana Cocoa (COCOBOD) and the government.

The COCOBOD will then contribute one per cent of the farmer's produce on behalf of the beneficiary for the total amount to be managed by a dedicated fund manager.

Already, a pilot phase of the project is underway in New Edubiase in the Ashanti Region, where about 2,800 farmers have been enlisted and their contributions taken.

The COCOBOD and the government are the sponsors of the contributory scheme that will operate as a hybrid mandatory and voluntary pension.

This came to light yesterday when the management of COCOBOD, the National Pensions Regulatory Authority (NPRA) and other stakeholders on the Cocoa Farmers Pension Scheme Project briefed some journalists on the state of the scheme.

The meeting was to provide information on the status of the scheme which was launched last year for journalists and seek their support in creating the needed awareness for the scheme to be successful.

The scheme is the first in Ghana's more than 100 years’ history in cocoa production.

It also marks the operationalisation of the COCOBOD Law, 1984 (PNDC Law 81) that enjoins the board to implement a contributory insurance and welfare scheme to provide decent pensions for farmers.

Ghana has about 800,000 households engaged in farming, although COCOBOD said an identity system for farmers would help distinguish farm owners from farm service providers.

The Deputy Chief Executive of COCOBOD, Dr Emmanuel Opoku, said all was set for the project to take off on the larger scale to secure retirement income for farmers and attract the youth into the farming of the cash crop to sustain the business.

He said the board of trustees to manage the scheme had been constituted and would be inaugurated tomorrow.

He said the board was strategically selected to comprise talents and expertise in the cocoa sector and relevant areas necessary to make the historic initiative a success.

Throwing more light on how the scheme would function, Dr Opoku said it was open to all farmers registered under the board's Cocoa Management System (CMS), with the cocoa card as the new primary source of identification for cocoa farmers in the country.

On contributions, he said registered farmers were allowed to join anytime they wished but must contribute for a minimum of five years to qualify them to benefit from the scheme.

He said registered farmers were mandated to contribute a minimum of five per cent of their produce at the point of sale, but were also allowed to contribute up to 10 per cent if they so wished.

The deputy chief executive said at the point of selling the cocoa, licensed cocoa buying companies (LBCs) would use electronic weighing machines to measure the quantities of cocoa and record the portion earmarked for the pension contribution.

He said the beans would then be transferred to COCOBOD for the monetary value to be credited the farmer’s account after the board had topped it up with its share of one per cent.

Dr Opoku disclosed that COCOBOD had already set aside funds equivalent to one per cent of this season’s projected cocoa output to cater for the scheme.

The CEO of the NPRA, Mr Hayford Attah Krufi, said the cocoa pension scheme would be regulated by the authority in line with regulations guiding pensions.

He said the scheme was structured such that the contributions of farmers would be invested in two separate accounts for the beneficiaries.

Mr Krufi said 75 per cent of contributions would be invested in a retirement account that would only be available for withdrawal after retirement.

The remainder, he added, would be invested in a savings account from which the farmer could withdraw whenever the need arose.

Just like other pension funds, he said, contributions would be invested in accordance with NPRA guidelines.

The guidelines require that about 70 per cent of pension funds are invested in government securities and the remainder spread on corporate bonds, equities, fixed deposits, among other less risky instruments.